Look at him, being all Michael Jackson with a bird 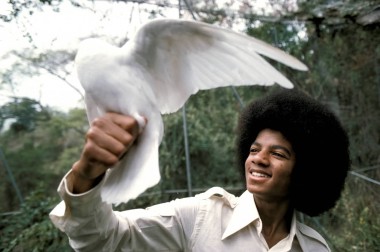 Mighty as the King of Pop may have been, we shouldn’t forget that fundamentally, Michael Jackson was a lazy man. In a very literal case of the mountain coming to Muhammad he erected a fairground at home in his back garden, he had a special oxygen chamber built specifically for sleeping in, he had a monkey butler called Bubbles to tend to his day-to-day affairs and answer his phone calls. Plus, and this is the most shocking statistic of them all, in the period of 22 years between Off The Wall and his final studio album Invincible, Jacko made six albums while the great ying to his yang, Prince, made 21. That’s precisely 15 more. Anyway, rather than rating his albums from 1-10 (which, FYI, would find Thriller at #4, Off The Wall at #1, and contentiously Forever, Michael, his underrated gem, at #2), I thought I’d list his best songs instead and no I haven’t forgotten about Billie Jean (which was #11)….

Baby Be Mine – Thriller, 1982
Thriller isn’t my favourite album of his, but it’s the one with his best track on it, which is this boogie belter that demands that first you dance, then you go away and bone each other.

I Can’t Help It – Off the Wall, 1979
Written by his best blind friend Stevie Wonder, this is one of the forgotten gems from Off the Wall. He even dropped the ‘h’ in Help to sound a bit cockney for some reason.

We’re almost there – Forever Michael, 1975
More of a smooth soul vibe on this one from an album that doesn’t get much of a look in. Well more fool everyone, because it’s wicked.

I Wanna Be Where You Are – Got to Be There, 1972
From that confusing period when he was still kind of in The Jackson Five but also sort of a solo artist – whatever way this one’s a doozy. There’s a great live version somewhere too.

Rock with you – Off the Wall, 1979
One of his widely recognized disco anthems, the first bar kicks in and a whole dance floor starts pelvic thrusting in unison for three entire minutes.

You Rock My World – Invincible, 2001
The only Jacko song from the noughties that could cut it with the vintage era stuff, by this point he looked like a melting clown, but he still had those moves!

Man in the Mirror – Bad, 1987
When the gospel choir comes in and booms CHANGE! about halfway in it’s physically impossible not to grab and hug a stranger. Or, if you’re Michael Jackson, you grab your dick.

Ain’t no Sunshine – Got to be There, 1972
Many versions of this have been made, but only this one features a toddler singing about missing the sweet embrace of his woman who has left him. Poor sod.

Don’t stop till you get enough – Off The Wall, 1979
One of those tracks that find people actually dancing their way onto a dance floor pulling a funny face that’s a mixture of surprise and resignation. His ninth greatest song, according to this list.

Black or White – Dangerous, 1991
A harder edge with the guitars, this makes the top ten solely for the bit where it breaks down and he goes all Lindsay Buckingham from Fleetwood Mac for about 10 seconds.