Okay thanks for the Dadbod craze, but now what about the Mumbod?

DiCaprio modeling a Dadbod (and Dadbeard) 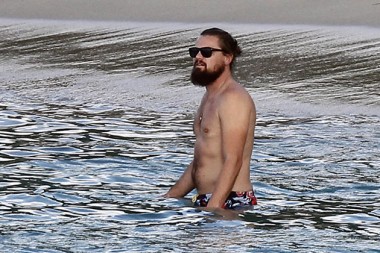 Whoever created this Dadbod bullshit is a genius and personally I’d like to thank them, to take them by the hand and pull them in for a hug so that they can feel the might of my protrusion – which would be my gut not my dick, although if they were hot enough there is a chance it would be both, but I’m married so shut up. Anyway to sum it up, it’s a wild new body craze that kneels in homage to men who are basically out of shape but not grossly out of shape. Men who exercise just enough to stay off the obesity scale but have zero hope of ever looking anything other than terminally ill if they suddenly show up with a six-pack. Men like me. I have to run at least 5-10km/week and lift light weights and swim a bit to counteract my chips and beer lifestyle and maintain a radiant 13-14 stone frame, but there will come a day when my foot comes totally off the pedal and I’ll inflate like a hot air balloon to around six months pregnant on the stomach with B Cups on the moobs at which point you might all start rethinking the appeal of the Dadbod in its truest form. But for now, this is great, I’m in vogue, I’ve always maintained that an overworked male body stops being masculine, that a hard flat stomach tells the story of a life unlived, so bully for me because the cyclical fickleness of fashion is smiling on me temporarily.

See I’m not stupid, I know that this blast in the sunshine won’t last, but it’s just nice that it can happen, and the main reason it can happen is because I’m a guy and guys generally have won the fucking lottery. This doesn’t happen so much to the sisterhood, regardless that the estuary running between us is narrowing. Where there has always been a media push towards the pert for girls, our gentle drift down the Nile has been disrupted of late by members of boybands built like middleweight boxers, or blokes from TOWIE and Made in Chelsea strutting around like bodybuilders. Frighteningly the narcissist body is threatening to become regarded as the norm, which would be a sad state of affairs for everyone, because from where I’m standing those rippling arms and heaving pectorals tell a tale of someone either taking life or themselves way too seriously. Guy narcissists and girl narcissists get together to create Michelangelo fuck sculptures and absolutely no one has a great time.

Hence, I’m here to start a push, to get a campaign going for the Mumbod. Mumbod and Dadbods getting together and having actual fun. It shouldn’t just be men who get to literally have their cake and eat it, we should all push back against the brainless self-obsession masquerading as “self-improvement” and celebrate bellies and squidgy thighs, and bits of arm that wobble, and tonnes of pubic hair and norks that don’t point at the sun, and hairy unshaven bollocks and crooked teeth and bad eyesight and everything else that makes us different, but normal and nice to be around. I’m not saying this to come off as a feminist, in fact I hate it when guys say that they’re feminists because it feels disingenuous, like they’re trying to score points or craftily trying to fuck a load of feminists. I’m saying it because I genuinely like women, actual women like the ones you meet every day. They’re fun and they’re squishy and it’s cool and I like it. And I’m just going to chuck this out there for good measure while we’re being open with one another: whenever I see a Before/After weight loss shot at least 70 per cent of the time I’d vote for BEFORE. Yeah man.

Put that in your soy latte.