Are you beach body ready? I actually always am

Someone’s been causing a stir 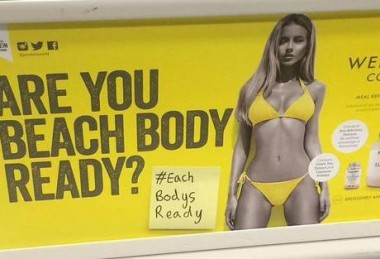 Somewhere along the line we appear to have lost the reality of a trip to the beach, we’ve forgotten about the sand in your clothes, the old guy in a g-string, the lady who is at least 121 and lying so still she might be dead, pasty groups of lads treating the place like a pub or a full size competitive football pitch, pubic mountains that rival Everest. Sea water stings your eczema, you’ve literally got salt in your nose, most “swimmers” are surrepticiously pissing. A kid might be doing a shit. The hours spent gormlessly smearing lotion on someone’s back like you’re their slave. Ice cream melting down your fingers, coins, keys and all of your worldly possessions in a safety deposit box which is just your unattended shoe, warm bottles of Evian. Men can’t walk anywhere without breathing in for dear life and farting with every step, over half of the people who arrive at the beach every day are immediately wondering what time they can leave, going for lunch is a gigantic hassle which finds you wandering into a restaurant in swimming trunks and casually inquiring about the specials like you’re an insane person. It’s generally uncomfortable, it’s not a great landscape – ask anyone who’s been to a desert, sand isn’t your friend. Thank fuck for the sea, but even that can be cold and deadly, watch The Island with Bear Grylls, that’s what real beach life is about – suffering. You leave tired, a bit burned, you’re clutching a Jackie Collins or a Jeffrey Archer, you’ve somehow managed to get sand actually inside your arsehole, you wonder what time you should go back tomorrow.

The point being that the beach as it’s sold to us isn’t real and neither is the elusive beach body, it’s rarely perfect white sand with pert people lobbing beach balls around. James Bond isn’t emerging rippling from the depths, and that yellow bikini girl definitely isn’t there with her strange concave stomach either. Instead it’s a world of perfectly spankable wobbly bits and people from houses made of bricks struggling to look cool in a curious new environment. I understand the outrage from the sisterhood, but let’s see the girl for what she is – a freakishly good looking non-reality, as real as the cartoon palm trees in a holiday brochure.