Some words on the MasterChef 2015 finalists… 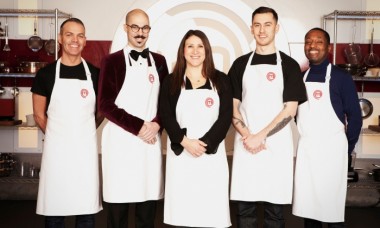 This series of MasterChef bears the smudge of a thousand fingerprints, with new features galore – cutaways to the contestants saying things like “looks lovely mate” or “I undercooked my duck, it’s fucked, totally fucked” or “… figs and jam I think”, a conveyor belt of guest judges, Gregg has suddenly become a massive hugger, people talk about “finals week”, one contestant kept calling the meat part of her dishes “the protein”. MasterChef has changed, it’s internationalized itself, there’s less dicking around, more action, and now that we’re fully ensconced in FINALS WEEK here are a few words about the finalists and who should win this bloody thing once and for all…

Tony – Tony might be in disguise, he looks like a chocolatier in a Witness Protection Program. The jaunty moustache, the look-at-me glasses, the relentlessly cheerful demeanour of a man who has finally escaped the house, Tony adds a dash of much-needed hipster cool to the show. Probably won’t win.

Emma – great MasterChef champions know their strengths and they stick to them – Shelina incorporated mangoes into everything, Ping made amazing takeaway, Thomasina did burritos. All of those cats had one masterful trick, and Emma has that too with her excellent Middle-Eastern gear like baklava or chicken with harissa. Disturbingly, if you’re quite drunk on pink wine and you squint she sometimes looks like a bit like David Cameron in a wig.

Simon – Simon is a perfectionist, he’s consistent, he’s probably the one to beat, he’s also quite boring. So far he’s excelled at making beautiful, delicate and intricate dishes then visibly trembling in his socks while people taste them. Man up Simon! Great chefs don’t give a shit what anyone thinks! Might win.

Paul – I’m going out on a limb here. Paul won’t even make the final three. (unless he does)