Defabricate Yourself #1: The Great Afrika Bambaataa Cover Up of 1995

We came so close… 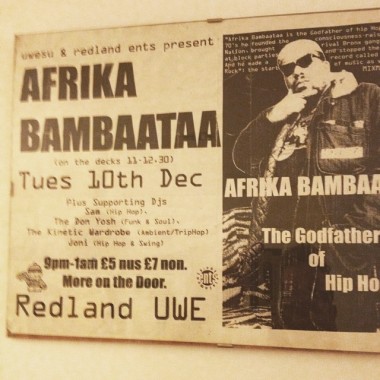 As I look down at my newborn son – so sweet, so innocent – it makes me want to be a better man. I want him to grow up hero worshiping his old dad, but I figure that to do that he needs to have a father worth worshiping, as opposed to the shoddy collection of cheap outfits and half-truths that he’s stuck with at the moment. He needs someone comfortable and honest, less full of shit and possibly better presented and with less ear hair. Anyway, I thought I’d start this overhaul by administering a personality enema and addressing some of the white lies I’ve told over the years and presenting them as a new series called DEFABRICATE YOURSELF. If we all do this the world might even become a better place, so feel very free to unburden yourselves in the comments section, or to submit your own pieces for the site (email [email protected]).

THE LIE: In 1995 I deejayed with Afrika Bambaataa

THE TRUTH: I didn’t.

THE EXPLANATION: This almost happened, to the point where I own the poster for the night in question – back in those days I occasionally played records to half empty rooms under the ridiculous moniker The Don Yosh (long story), I was a student DJ in Bristol town playing great tracks by people like Donald Byrd and James Brown (rhyme alert!), and by some fateful twist of brilliance I was set to support one of my heroes – Afrika Bambaataa, hip hop’s first true pioneer. Only it didn’t happen, he called in sick. This conjured images in my mind of Mrs Bambaataa clutching his mohawk while Bam barfed into his hotel toilet and sobbed incoherently. But deep down I knew he wasn’t sick. He probably just couldn’t be arsed to play to a room full of kids who’d all got wasted at home before coming out. Unfortunately his lie began a chain reaction of many other lies, mainly coming from me, where people would see the poster for the night in my flat and they’d be so overcome by the amazingness of it all that I’d panic, not wanting the adoration to end nor the crown to slip, so I’d pretend that the night had gone ahead as planned and that I’d even met “BAM”. I’d say stuff like “oh yeah he was okay actually, really down to earth” “BAM? Yeah some wicked records, that guy – nice cat” “Heh heh, good old BAM – funnily enough he thought I was a much better DJ than him”. A small part of my soul died every time, so I feel I should come clean now – the truth is that Bam blew us all out, and I was just another bloke in a navy blue Kappa tracksuit top spinning records to disappointed students. I’M SORRY that I lied about it.

NEXT TIME ON DEFABRICATE YOURSELF: The time I didn’t actually get off with a girl called Kim on holiday when I was 12.