Foxcatcher – Reviewed by The Studio Exec 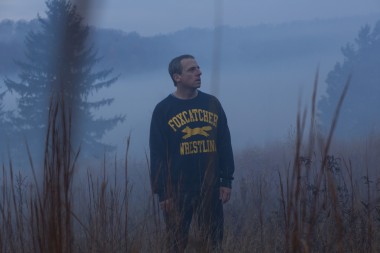 Steve Carrell plays Mr. Burns from The Simpsons as he uses his money and influence to help build a wrestling team with Magic Mike (Channing Tatum) and his brother, the Hulk (Mark Ruffalo).

Capote and Moneyball director Bennett Miller continues his love of single word titles and his forensic exploration of the behind the scenes of competitive sport. Based on a bizarre true story, Carrell is John DuPont, a multimillionaire whose taste for wrestling sees him finance and increasingly manipulate the lives of Mark (Tatum) and then Dave Shultz (Ruffalo), two wrestling champion brothers. Mark is the impressionable dolt, raw power, jutting jaw, a decent guy, but exactly the sort of tabula rasa that duPont can lord over. Dave, on the other hand, is a man who knows himself, a keen study of character blinded only by his wish to see the good in everyone.

Miller’s film is ultimately about the corrosive effect of too much money on almost everything. DuPont is the unhappy man Goethe warned us about, capable of poisoning everything, plagued by delusions of grandeur but with the wealth to bankroll those delusions into traps for other people. The acting is superb, Carrell finds an older, richer variation on his Mike Scott persona, and Tatum shows himself to be a fine character actor and Ruffalo is as charismatic and watchable as ever, as everything DuPont would like to be.

Come Oscar season there will be talk, but that’s trivia. Foxcatcher’s dark satire needs no glitz or affirmation. By they way, [SPOILER ALERT] there is no fox and no one catches it.

If you’re a fan of movies or of laughing until your tummy hurts, go and check out The Studio Exec website, plus follow the guy on twitter @studioexec1 – jumbo LOLZ guaranteed.