Including this gorgeous monkey… 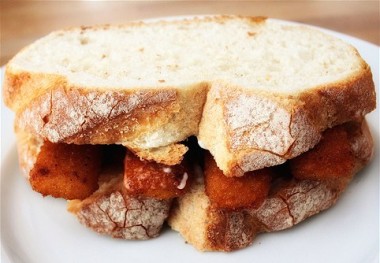 Christmas has come and gone, and it was while I was tucking into a turkey and stuffing leftover sandwich that I wondered if I’d ever done a top ten sandwiches on Interestment. Turned out I’d done a Top Four many moons ago, so I thought to myself “I can amend that, update it, add on six, round it up like they would on Buzzfeed although with a slightly less rebellious, unconventional, and ‘funky’ number”. And lo I got to work, thinking about sandwich combinations, muttering to myself, drawing doodles and diagrams, wondering if there was a way to make this damn thing work. Then after about 45 long, fruitful minutes, it emerged as it is below. This is it, the BEST TEN SANDWICHES EVER, it’s taken a lifetime of research and a lot of getting it wrong. Please, enjoy. Then tell everyone about this day… 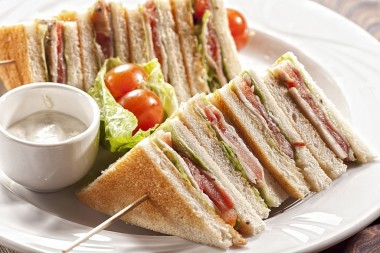 In simple terms it’s a double-decker comprising bacon, chicken, lots of salad. But it’s so much more than that, it’s the ultimate fusion food, a lifestyle choice, it’s a BLT and a Chicken Salad merged, presumably invented when a man just couldn’t decide what to have so he ordered both in a moment of wild abandon and revelation. Sometimes it’s toasted, it’s in a constant state of flux, evolving like an amoeba under a microscope, it’s the very definition of freedom of speech, greed, and decadence. 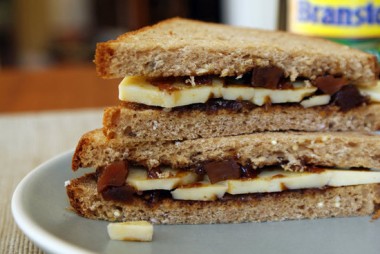 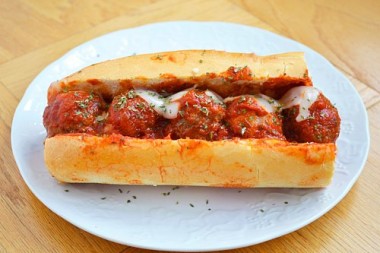 For all their wars on terror, crack corners, guns, g-strings, prom night massacres, shoulder pads, over-elaborate handshakes and toddlers who look 35 (and not even young 35, but old, lived-in 35), Americans somehow find time to make great sandwiches. Such as this stretch of meaty bastardry that used to serve me well on the back of a 6-8 pinter. Soft sub rolls, meatballs in rich tomato sauce, a spattering of parmesan. HELLO MOUTH. 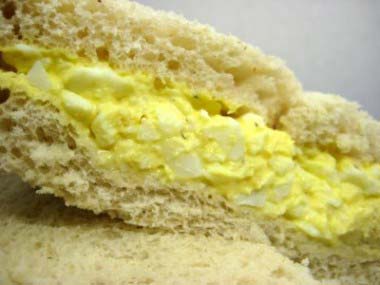 A contentious entry, this is an exact science. The Egg Mayonnaise needs to be perfect, which means making it really well, not half-heartedly, not like you don’t mean it. You’ve got to believe. So boil the eggs, cool them down, mash them up, stir them in a bowl with mayo, a tiny bit of mustard, the tiniest thimble of white wine vinegar, salt and pepper, and then add the onion which must be sliced so thinly as to be almost invisible, ideally like the tracing paper you’d use to trace tracing paper. Whatever that means. 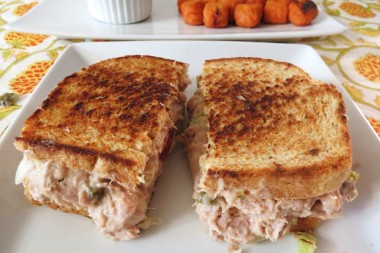 Melted cheese on bread is an absolute revelation every time. Cheese on toast is amazing, French bread pizzas are superballs. But best of the lot is a Tuna Melt which I like to have as an open sandwich with an extra helping of sweet pickles. Specifically Mrs Elswood’s Sweet Cucumber Sandwich Slices. If you don’t own those, leave the house immediately and go to a shop to buy some, I think it might even be a law now to have them in your fridge. 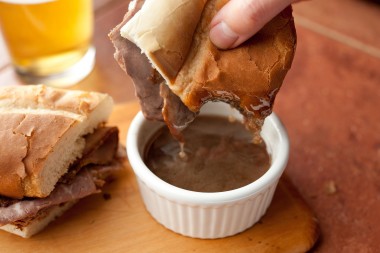 Another American classic. I recently had a Jambalaya Po-Boy sandwich at a dimly lit pub-slash-restaurant-slash-art-space-slash-improv-group in Brixton in South London because that’s the kind of life I lead these days. I’ve had a Reuben too, they’re nice, but this American standard smashes all-comers out of the park. The set up is simple – you get a gargantuan stack of pastrami or beef, then next to it there’s a small bowl of roasting juices that you dip the delicious concoction into before adding to your mouth and letting out loud groans and grabbing your penis (or vagina). 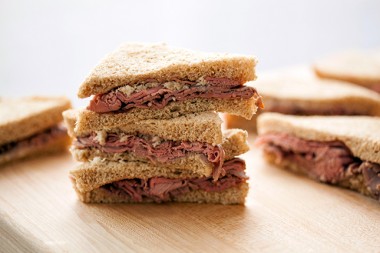 According to our great friends at Wikipedia – which is totally free, by the way, you should pay for it – people began roasting beef in around 1731, which means that for thousands of years cows just roamed around nonchalantly with no real fear of death. Most would eventually die of old age or cow cancer with their various bovine relatives weeping around their stable beds. Unfortunately, once we’d got a taste for their great steaks and gorgeous cuts, it wasn’t long before we were cramming them into barns and remorselessly blowing their brains out so we could make beef sandwiches. Preferably on white bread. Or brown (pictured). 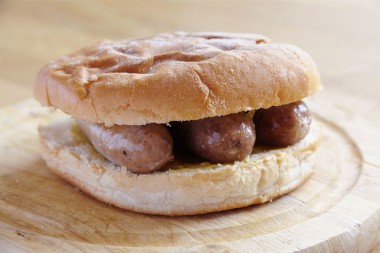 Believe you me, and I should know because I grew up in leafy middle class streets and I have an arts degree, nothing makes a morning more working class than asking some doris with big hooters to do you a sausage bap and a mug of splosh. It’ll come on a soft floury bap, smothered it in RED. Not BROWN. BROWN is bullshit. You walk away taking deep deliberate drags on a roll-up held between a thumb-and-forefinger pincer. You go girl. 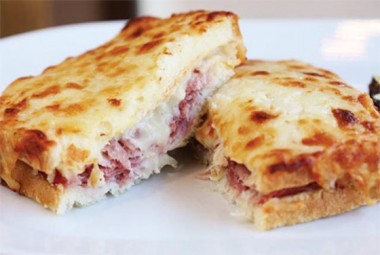 Say what you like about the French, but for all of their masterful designing of towers, and their great devotion to education and life-appreciation, they’ve actually managed to do some really amazing things with food. Pâté was basically them, so were meringues (although the Swiss might argue about that) but it’s the Croque Monsieur, a small Gallic gentleman covered in ham and cheese and bechamel sauce, who is the real hero of their cuisine (pronounced “quiz-een”). Then if you crack an egg on top of it, it magically becomes a Croque Madame, because eggs represent ovaries and Madame means “woman”.

It took us all a while to realise that, in life, there are no rules. You can literally do whatever you want, so long as you’re not out murdering too many people. If you want crisps with your lasagne, go for it. Fancy a dollop of ice cream in your glass of Coke? FINE, call it a Coke Float! Want to drink a whole bottle of Vodka before work? Okay, things might get weird, but sure, it’s your life. How about Chip Butties? Fish Finger Sandwiches? Minced beef in a bagel? All of these things are completely allowed. In fact the middle one, about the fish fingers, is particularly good.