Movies setting a bad example No10: Back to the Future

Kids, just turn around and walk away. Nothing to see here… 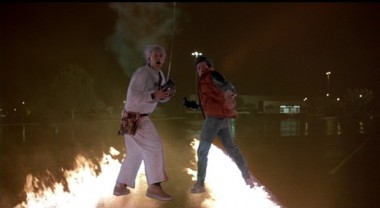 To a man (and woman) the family was thrilled when my dad came home with a rented VHS copy of Back to the Future. We’d heard such good things. My brother had seen it at the cinema and told us how it was a love story set in a different age using the miracle of time travel. It sounded so other-worldly but wholesome enough for everyone to enjoy from Granddad in his comfortable chair, to whichever cousin got lumbered with the worst bean bag. My dad performed the ritual of blowing dust out of the video player and inserting the tape, there were snacks, you could almost taste the excitement and it tasted like a bowl of Minstrels mixed with Maltesers, like a dream Best of… version of Revels.

Unfortunately from the pressing of Play onwards the evening took a dramatic downturn, and by the time the disgusting tale had fully played out, the room was left in a stunned silence bar some occasional whimpering and the frantic mumble of my cousins questioning everything they had ever known through their bewildered tears. What had just happened? We sat for a few moments barely talking, before my father finally whispered his apology and took the tape from the video recorder wearing a marigold. I shall now list the disturbing lessons your child would take from this sick, twisted film…

1. That old guy down the road, the one who looks a bit like Jimmy Saville. The one who lives alone. Crazy hair, dresses age inappropriately, bit of a hoarder. That old guy. Apparently he really likes short teenage boys. You should befriend him. He invents things, he lets you drink cocktails from coke cans. You should go on holiday together.

2. At some level – even if it’s buried deep beneath the surface and not acknowledged, not ever, not in anyone’s lifetime – your mum fancies you.

3. Talking of your mum – did you know that she was once just an object? It’s true. She was a prize to be won by warring teenage boys. Whichever one punched the other one in the face the hardest won her, and she would be theirs forever.

4. On that note, geeky, nerdy men who do intellectual things like READ BOOKS will turn out cowardly and pathetic unless they learn to channel their sexual frustration into premeditated acts of violence.

5. If you’ve decided that skateboarding will be your chosen method of transport through life, feel free to infest roads, grabbing haphazardly at bumpers to make your journey considerably faster.

7. If you drive really really fast towards a wall eventually you’ll go back in time.