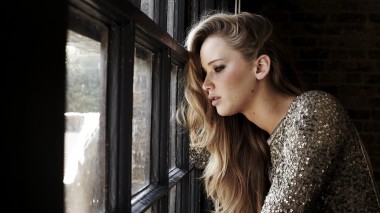 The internet is swamped in flesh, you can barely move for it – the general evolution of technology has been thrilling in so many quarters, but none more so than in the secret one that shall not be dwelt upon too much that enables arch masturbators to watch people fucking until the cows come home. No doubt some perverts even watch the cows fucking too. It’s one of the richest ironies in life that for all our advancement and progression, nothing has quite taken away our obsession with looking at other people’s boobs, vaginas, willies and bums.

That they are now public property isn’t fair, it’s not right, they were something private and meaningful to her and now undeserving and unintended eyes are peering at them, and it doesn’t take Einstein to fathom what their hands might be up to. It’s a shame for Jennifer Lawrence, it’s an abhorrent intrusion, but – for what I expect is a largely teenage audience – if it really is a sex crime to look at these images, and if they really should be cowering in shame about it, how many other people should be cowering for similar but different reasons? The long and short of it is that most of the guilty bystanders will be guys who fancy Jennifer Lawrence and now they can see her tits. Her actual tits. It’s like Christmas for them. For years photographers with absurdly long camera lenses have been crouching shamelessly in bushes on bended knee praying to whatever unforgiving god has been watching over them to deliver some rarely-seen celebrity tits – these pictures have then been snapped up at preposterous prices and printed in papers and magazines. I’ve worked at some of the newspapers and magazines that print that kind of stuff and they’d barely bat an eyelid. For some fucked up reason people now see celebrity’s private lives as their business. I’m not saying that any of this justifies the current situation, but I am saying that to look at what’s truly wrong about it we might need to prod around a little closer to home with a shitty stick.

We need to figure out what constitutes intrusion, and to figure out whether ALL of it should stop, whether it be the hacking of private porno shots on your phone, or the obsessive celebrity journalism of the Daily Mail and any number of equally grotesque rags – surely they should also be held to shame for their sinister and poisonous exploitation of famous faces, their seizing of celebrity pounds of flesh on a daily basis. Without wanting to get too arch and grumblesome about it, it’s good that people have exploded with accusatory rage about the revolting violation of Jennifer Lawrence, and yet I know that some who protested have also made a hefty part of their living exploiting celebrities – not in such a gross and overt way, but by biting chunks out of them nonetheless.

It strikes me in this case that people simply LIKE Jennifer Lawrence, she seems like a good and decent person and an excellent role model, and as such she should be spared this tawdry, shitty treatment by her public. But how about we take this opportunity to really think about the bigger picture? To examine why these things are such high currency in the modern world and why people feel entitled to see them, and we need to point the accusatory smelly finger of blame in the right direction, at the real perpetrators, not solely in the direction of the relatively harmless internet cretins who just fancy “examining” a rare pair of knockers.