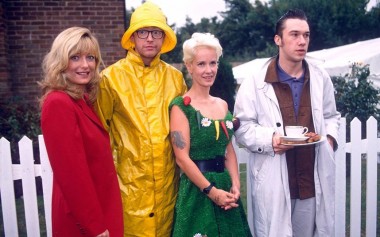 I have many dreams in life, big dreams – one is to learn to drive and then buy a VW camper van and travel the world. Others are more attainable, like running my own television channel or being chief commissioner at the BBC. And should either of those become a reality, my first order of business would be to get these TV shows back on the air….

The Big Breakfast
It became tired and laboured towards the end, like an old dog nearing its death, or like another kind of pet in precisely the same metaphor/predicament. But for a while this provided a much-needed adrenaline shot in the morning, and it’d be a nice tonic if you can’t stomach the Stepford Wife Presenters they’ve got on BBC Breakfast and TV AM.

Would Like to Meet
With the sole exception of seeing grown men on slightly-too-small motorbikes, nothing is funnier than watching someone desperately pressing a panic button underneath a restaurant table while trying to feign casual small talk. For that reason alone, this gets recommissioned.

Top of the Pops
It’s been marred by the sex-offenders-only employment policy of the 1970s, but don’t let that put you off, the musical performances that happened during the off-camera groping sessions made Tea of the Peas one of the best shows on telly. I’d reboot it, only this time it’d be hosted by people who don’t carry lube on their person (during the day).

Your Face or Mine?
Possibly the best TV show IDEA ever – couples rate their looks against other people, and then each other – why someone decided to scrap this is one of the greatest mysteries of our time. Up there with other great mysteries like “where do all my pens go?” and “is there a God and what does she want?” That’s right, I said SHE! *does two-fingered peace sign* FEMINISM!

The Monkees
My first day on the job would last precisely nine seconds. I’d swan into a board meeting wearing a dressing gown, bark “RERUNS OF THE MONKEES!”, then return home to my slumber without pausing for a reaction – safe in the knowledge that I’d just saved the fucking BBC from ruin.

Streetmate
Essentially this was LIVE TINDER before Tinder was even around, so I’d reinvent it as a kind of Hipster Blind Date, hosted by Miquita Oliver. She’d introduce people with tattooed doodles on their arms, then they’d stand pigeon-toed in Converse All Stars self-consciously weighing up how to greet one another before half air-kissing, half bowing. WELCOME BACK!

Old Charlie Brown Cartoons
You’re never to old to enjoy cartoons, so each afternoon I’d treat viewers to classic Peanuts films, like It Was a Short Summer, Charlie Brown, You’re in Love, Charlie Brown, and the all time classic Fuck You, Snoopy!

Topless Darts
For those who can’t remember it, this was a LIVE TV staple, which featured two braless chicks playing darts with their tits out to win a top. After a while you’d actually forget about the boobs and it just became DARTS. Hence my version would exchange the glamour girls for professional darts players with their tops off.

The Word
There’s nothing on TV these days for the drunken masses who like to stumble in at 11.30pm with a kebab spilling out of their pocket and little blobs of sick on their chin. That could easily be remedied by luring Terry Christian out of retirement and getting someone to build another Dani Behr or Amanda de Cadanet in one of those labs that specialise in creating hot posh people.