Hey everyone, here’s some REASONS TO BE CHEERFUL! 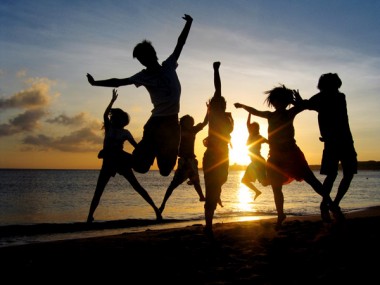 Earlier in the week I found myself in the grips of an existential crisis as I wondered how we can possibly live in a world where you have outdoor swimming pools and microwaves and Lady Gaga, and yet still people are getting their heads chopped off. It just doesn’t make sense. The rich-poor divide is apparently widening despite people being aware of the concept of ECONOMY since the dawn of time, popular and trusted TV faces from the 1970s and 1980s seem to be systematically unmasked as mass pedophiles like my childhood was just a really traumatic real life episode of Scooby Doo, minus a massive dog. Even my old pal Twitter was getting me down – it’s starting to feel like a hub of cynicism, constantly taking cheap shots at easy targets. Basically, for a minute there, the world seemed like a cruel, uncompromising, silly place, so I turned to a small corner of the planet where I knew I’d find an extra coil for the spring in my step – I turned to Facebook, begging people for reasons to be cheerful or for them to describe situations that will always make you feel amazing, and as it happens, there are loads of them. I shall now list the replies, courtesy of the good upbeat people of Face-Face…

– “We can have sex with other humans. I think.”

– “… putting on jeans and finding a tenner in the pocket.”

– “Eating out of your own garden.” (not a euphemism)

– “I challenge anyone not to feel cheerful for a fleeting moment when they use one of these everyday inventions: the contactless card, the magic button that makes the hoover suck up its own lead very fast.”

– “Growing a moustache and that first time you find a secret taste of your lunch in it later in the afternoon.”

– “Cooking a dish at home that tastes better than at a restaurant.”

– “Successfully navigating a conversation where you barely understand what the other person is saying but you both get the information you need at the end.”

– “The dawning realisation of the etymology of a word after years of using it. Some basic examples: cup-board, break-fast, sinister (left handed), salary (payment in salt), decimated (reduced by one tenth), myriad (one hundred thousand)….”

– “I saw Kate Bush last night – that made me cheerful!”

– “Remembering the time you hit a golf ball BACKWARDS?” (yeah I don’t really remember that)

– “… the statistical likelihood of all your ancestors surviving long enough to procreate, and then each of them ‘coming first’ means that the chances of you being here at all is massively less likely than winning the National Lottery several times a year. That’s a pretty big reason to be cheerful!”

SEE? It really is a wonderful world after all! THANKS FACEBOOK!