I slept through Guardians of the Galaxy, here’s my review

These are the “Guardians”… 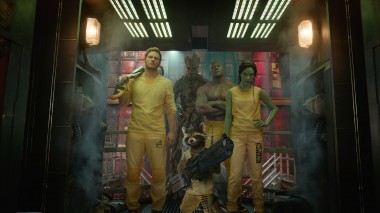 It was a Sunday morning when I looked over at my woman who was either looking at me or she was looking out of the window behind me and I said these immortal words: “Hey girl, let’s go to the cinema this afternoon.” I alphabetised my reasons for going by stating that a) we hadn’t been for ages, and b) I wanted to. She looked at me with a smile slowly creeping onto her face, at first gently like the Mona Lisa, but then wider and wider until her eyes were squeezing out of their sockets like table tennis balls being pushed through a hosepipe, and her mouth resembled the singer Carly Simon’s. I took this to signal a YES, and we then debated for twenty or thirty minutes about what we should see. Would it be Boyhood? The 15-year labour of love from Richard Linklater, who also made Dazed and Confused which is one of my favourite films, and also School of Rock which is one of my favourite films, and also Before Sunset, which is the story of two students reciting poetry to one another on a train while the other passengers try not to snort laughter through their noses. Or should we go to Guardians of the Galaxy which looks fucking stupid and therefore brilliant?

And so it was that we strode into our local cinema at 2pm on a Sunday afternoon with a handbag full of Minstrels and Ribena, and demanded two tickets for GOTG (shorthand for Guardians of The Galaxy). I’d been drinking really heavily the night before and my wife is pregnant which is basically the same thing. We were ravenous and excited, and also quite close to passing out if anyone went remotely near a dimmer switch. The seats were comfortable, the Ribena was flowing from a straw to my mouth, and I made it through the “Guardians of…” bit in the opening credits before my eyelids started tugging down like someone had fixed sandbags to my eyelashes. I found my last preserve of strength and looked over at my gal who was already lurched backwards in a contorted yoga position (I want to call it The Crab?) with her mouth wide open like she was silently screaming at the ceiling. Sporadically over the next two hours I’d yelp myself awake, or one of us would come to and nudge the other one and point at the film. I probably amassed around half an hour of lucid viewing, so, with that in mind, here’s my review of Guardians of the Galaxy. It takes a list form:

1. It stars the fat guy from Parks and Rec but he’s been working out so now he’s HOT and girls can fancy him for his taut rippling body as well as his GSOH. He’s the main character, and at one point you’re all like “Ah man, he’s totally going to make babies with that sexy green chick!” and then you’re all “WHAAAA? HOW DID THAT NOT HAPPEN??” because something happens while you’re asleep that means he misses the boat.

2. There’s a talking raccoon in it! Or a cat. There’s definitely an animal that SPEAKS, it could be a rat and it’s fucking HILARIOUS. It’s kind of the brains of the whole operation despite being a rabbit or whatever.

3. There’s a giant tree that only ever says one sentence which is something like “me no talk!” or “I’m a BIG TREEEEE!”

4. There’s a baddy with a goatee beard and he’s got a sister in fancy dress who looks like she genuinely just lives in Dalston and would wear all of that stuff anyway. The mission is to kill him. I think.

5. At one point the hot green girl looks like she’s going to die, but then a blurred light sharpens into focus and she’s still on the screen so you know she’s still alive. You breathe a huge sigh of relief that morphs into a massive yawn, and then the main guy does a dance. The credits roll, me and my gal jut upwards in our seats and momentarily look at one another like we’ve literally never met.