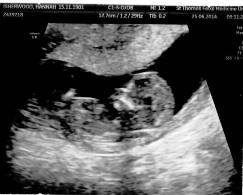 Sometime around Christmas or New Year I’m going to become a dad. I know that because my gal is currently pregnant and I did it to her. We’re sharing the blame for that, but while she slowly inflates and blossoms and takes everything in her stride like a superwoman, I’m now looking deep into my soul to figure out what it is I need to figure out. In six months we’re going to have company, it’ll be half my responsibility, and when it looks up at me with bewildered eyes, at the moment I’m pretty convinced that I’ll be staring blankly back. We’ll then be stranded in a vortex of confusion, shuffling from foot-to-foot with our hands in our pockets, neither of us sure about what’s going on. I want to avoid that. I at least want to pretend that I know what I’m doing. So with all that in mind, I thought I’d impart some wisdom to my little baby whatever-it-is…

If you’ve already done a shit, don’t immediately do another one – I’ve seen this happen numerous times with other people’s children, and not only is it inconvenient, it’s also quite impolite. My child will hopefully do one poo in the morning and then another one later in the afternoon. Preferably on the toilet.

When you wake up in the middle of the night, don’t cry, just go back to sleep – my plan is to teach my baby a few simple yoga breathing techniques, so that when it wakes up, rather than letting out that primal cry that our young are famous for, it’ll do some transcendental meditation instead. We’ll then probably wake it up at about 8.30/9 for a breastfeed.

Want for nothing (because we have no money) – if you’re reading this, chances are you’ve seen this website. I actually write for a living, which is a ridiculous thing to do, and as a result I don’t have very much money. So early on in our relationship I’m going to explain to my baby that the apple-cheeked toffs being transported around in luxury prams are actually the poor people, and our wheelbarrow is the very height of bourgeois sophistication.

Don’t worry if you’re totally gross to look at, there’s a slim chance you might not always be – I’m often described as “insanely good looking” by massive groups of hot girls who can’t get enough of me, and yet when I was a baby I looked like a Cabbage Patch Andrew Lloyd Webber. Hence from an early age I shall tell my child the story of The Ugly Duckling, only instead of DUCKLING I’ll say BABY. Just to really spell it out.

Smile on demand – if I added up the time I’ve spent looking at other people’s children, waiting patiently to see them smile, I could probably invoice the parents for a very large sum of money. No such thing will happen with my little performing monkey, which I will teach to smile on around Day 3 of its life, once we’ve completed the Sleeping Through The Night (Day 1) and Changing Your Own Nappy (Day 2) modules.

Embrace experimental fashion – in its early stages of sartorial development, my baby won’t have much option but to wear weird mismatching outfits that were assembled by people drunk with tiredness. My advice would be to OWN it.