10 things that should be revived immediately

Including this amazing shop… 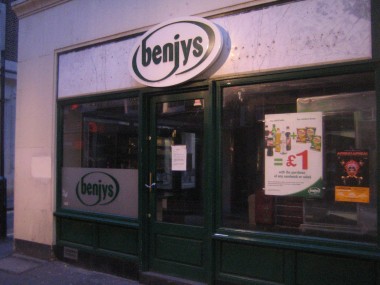 The other day I was feeling contemplative as I sat on my balcony overlooking some houses, and I wondered about all those great TV shows and lifestyle magazines and food stuffs that were once so prevalent and are now no more. I yearned for each of them individually, and I wept for them collectively. I don’t know where any of this is going, but I’m about to introduce a short list of things that should be revived.

I’d love to know what you’d like to see revived too. Perhaps pop a suggestion in the comments bit?

Smash Hits – the teenage staple Bliss is the latest in the long line of doomed magazines to be conveyor belted into the abyss, and as a magazine writer myself (I even worked for Bliss once), this now puts me on a similar footing to the people who used to take messages for pagers. We need mags back, and fast, else frankly I’m fucked. Smash Hits making a triumphant return would be a good start – if only to remind pop stars that, above anything, they’re there to be laughed at.

The Sopranos – The Sopranos is the greatest TV show there’s ever been, and I base that on having seen ALL television programs ever made and not liking them as much. It’s enthralling, it’s engrossing, it’s educational because you learn how to pronounce things correctly- “moot-sarray”, “pra-shoot”, “gabagool” is still “gabagool” no matter how you look at it. This one would be easy to bring back too – just fade in from black and pretend nothing happened. Even though Anthony Junior is suddenly middle aged and Tony’s being played by Danny DeVito.

Dungarees on Men – there’s probably a hipster contingent somewhere who have been “rocking dungas” for absolutely ages. Those pricks can fuck off. I’m talking about the average man on the street, strolling through town in a pair of dungarees, not feeling stupid nor getting heckled nor suddenly getting the urge to jog home. That’s a world I want to live in.

Benjys – before London became saturated with Ruperts selling pulled pork sandwiches and artisan buns, the rich-poor divide was far less blurry – if you had lots of money you dined at Pret, if you didn’t you went to Benjys where you could get a giant jacket potato with cheese for 3p.

The Face – I wasn’t a huge fan of The Face, chiefly because they once commissioned me to write “an essay” which sounded unbelievably pretentious. But I’m just one guy in a sea of other people, and those other people are made up of males and females with penises and vaginas and literally all of them are super-trendy now because of tattoos and Top Shop. It could even be MAINSTREAM this time around (OMG they’d hate that!). (Not sure why that was in brackets).

Wendy’s Burgers in England – apparently there used to be a Wendy’s in London, A WENDY’S! For people who don’t know, Wendy’s is a great fun burger restaurant that’s like McDonalds only the burgers are square. SQUARE! Like a six-sided dice or an ice cube that’s yet to melt. It’s re-emergence into the burgeoning street food scene would really shake things up.

Press Gang – the greatest kids TV show of all time, and that includes Byker Grove starring Jimmy Nail, and Grange Hill starring Ray Winstone. For those who don’t remember, this told the story of the Junior Gazette, a Bugsy Malone newspaper run by teenagers, and it starred Dexter Fletcher and Julia Sawalha as Dempsey and Makepeace.

Flight of the Conchords – like so many great bands this series suffered from Second Album Syndrome – the first series was amazing, the second featured lots of funny guys standing around with their hands in their pockets looking confused. But do normal people throw in the towel and flounce off to pursue extremely successful careers elsewhere just because they’ve run out of jokes? (Don’t answer that)

Good pubs that no one really goes to – when I was a lad back in the 1840s it wasn’t uncommon to tie your horse to a tree and wander into a pub where you’d find a jukebox with all the best songs on it, and a comfy seat for you and your crow. Nowadays you wouldn’t stand a chance. It’d be full of dickheads with beards. Like me. And girls with pudding bowl haircuts. Like Joan of Arc.

3 Responses to 10 things that should be revived immediately