My Greatest Ever England Football XI

Including these conjoined twins 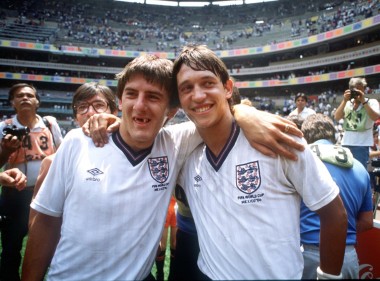 Like an overeager anaesthetist at your hospital bedside, the World Cup is looming, so I thought I’d share with you my dream England football team. You’ll notice that it doesn’t really feature anyone who played before 1980 and there’s a simple reason for that – I was born in the mid-1970s, right at the beginning of PUNK (which is neither here nor there) so I know nothing of Bobby Moore and Bobby Charlton, and even Kevin Keegs is just some prick who told me how to cross the road without getting repeatedly beeped at.

Got to be Shilts in goal, lads. Got to be. Old Shilts, giving it some in goal.

You might look at this back line and think I’m having a banana. Where’s JT, Solly, the graceful elegance of a Ferds or a Des Walker? Where’s G.Nev or Gary Pally? Where’s Mark Wright, the Billy Eliot of defending who hung in the air at the back stick? The short answer is that I wanted a no nonsense wall of discipline, because if you read on you’ll notice that none of the other players can tackle.

The bad news is that these guys won’t be shifting many tickets to the “hormonal teenage girl” demographic, the good news is that they can stand eye-to-eye and toe-to-toe and even shoulder-to-shoulder with any of those ticky-tacka guys over in Spain. One touch, two touch, three touch, you could literally name a number and add the word “touch” afterwards and these guys would compute it immediately. Both underrated as footballers and as charismatic after dinner speakers, they controversially keep people like Steveland G, Gazza, Pauly Ince, Bryan Robson, Bryon Robsun, Byron Robsen, and Brian Robsun out of the team. As well as Ray Wilkins.

We’d never acknowledge it as a nation because we’re far too polite, but we’ve had some dreamy runners at the top end of the park (which is football talk for around the upper echelons of the pitch). Chrissy Wads, the great Matthew Le Tissier, the Archbishop of Funkenstein Darren Anderton. But none of those artists can match John Barnes and Steve McManamanaman. The former being the greatest footballer ever born (apart from a reasonably long list of other people), the latter being so good that even the demanding crowds at Real Madrid Stadium were known to chant his name in confused pigeon English week after week.

Which of the great pundits to go for – smooth-talking Gary, amazing stater-of-the-obvious Alan “that’s spelled A-L-A-N” Shearer, Stan WHAT YOU LOOKING AT??? Collymore? Not forgetting horse trainer Michael Owen, professional landlord Robbie Fowler, shagger of elderly prostitutes/eater of huge lollipops Wayne Rooney. In the end there was only one person for the job, and that was Gary. Famous for his very oily tanned thighs and his wonderful pokey-inny goals.

Now where did I get it all wrong?

2 Responses to My Greatest Ever England Football XI