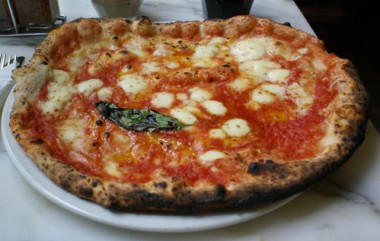 It’s been a while since I wrote an expert piece about food, so I thought I’d remedy that with a list of fine pizzas. I’ve been a big fan of pizza for years now. I’ve enjoyed french bread pizzas, normal pizzas, massive deep pan meat feast pizzas, and now after years of research I’m going to pass on my expertise to you. Should you ever visit London, I suggest you jump into a cab and demand transportation to one of these places…

Franco Manca – you’ll find this gorgeous traditional pizzeria in Brixton Village, where people with beards go to be seen by other people with beards, or by girls with 19th Century Trappist Monk haircuts. In the summertime it’s a sea of flowery dresses. Anyway, the dough on these is really nice, as in REALLY NICE. I have no idea how they make it, nor how to describe it beyond saying “nice” a lot.

Pizza Pilgrims – this is basically the same as Franco Manca but it was set up by really posh English guys. They do a pizza with broccoli and sausage meat that is TOTALLY AWESOME. Their words, not mine. I’d never say “totally awesome”, I’d say “totally awes”. I like to abbreviate things to feel young and relevant (aka young and rels).

Reganos – it’s just a simple takeaway that doesn’t claim to be Charlie Big Onions (whoever that is). And yet it’s one of my favourite pizza places in the world, entirely because they’re happy to deliver to the pub I go to. Go for the Mexicana, which combines all of the traditional flavours of Mexico – peperoni, chillies, pizza dough, mozzarella, tomatoes.

Homeslice Pizza – I know I just alluded to this list being in order of preference, but actually it isn’t. It’s impossible to put pizzas into any semblance of order because they’re all basically the same. Apart from these guys (NICE SEGUE JOSH!)! They chuck mind-boggling things on pizzas, like haggises or horse shoulders or hairy pig vaginas, although granted, a couple of those toppings might be slight exaggerations. The vaginas are shaved. I’M KIDDING. They’re not shaved. AGAIN I’M KIDDING. I don’t know who I am anymore.

Pizza East – in the spirit of full disclosure you should probably know that I’ve only ever been to Pizza East once and I can’t remember anything about it. I know there was a pizza, and I know it was in East London so the whole place was probably dripping in kindness and humility, but beyond that I’m pretty stumped. Let’s give it FOUR STARS.

Princi – if you ever find yourself wandering aimlessly around Soho, weeping incoherently and aggressively asking people for money, I’d urge you to spend some of that hard earned change at this place. It looks like a massive Italian deli (because it is one) and it does a lovely pizza with Buffalo mozzarella and fresh tomatoes on it. It’s very popular with actual Italians. Or at least I think they’re Italians. They could be Spanish. Or French.

Eco – I first moved to London in the winter of 1999. The world was a very different place, we were all transfixed the the metal birds flying overhead – what were they and where were they going? Turns out they were planes going to Portugal – and I used to take my dates to Eco on Clapham High Street to discuss politics, drink white wine and occasionally french kiss one another in full view of the other diners. We’d then feast on HAM pizzas. HAM!

Donna Margherita – okay I’ve never been here, but I saw it on London Live (the exclusive London television station) – it was reviewed by a cab driver who knows everything there is to know about eating and he gave it eleven out of ten. Not even as a joke, he totally meant it. He genuinely thinks that if you count to ten at some point you’ll get to eleven.

Domino’s Pizza – the thing I really like about Domino’s is that the delivery men adopt a strict no-eye-contact policy when they hand you your pizza. Some even know to wear their motorcycle helmets to keep the human element of this transaction to a strict minimum. It’s a proud moment for no one involved, just a necessary evil. Their Meat Feast is to die for!

Pizza Express – I remember the days when you’d save up for months to take your woman to Pizza Express. There you’d share bruschetta and feed each other dough balls, you’d laugh at the name Sloppy Giuseppe and make a laboured joke about how it sounded like an Italian guy who didn’t know how to wipe his bottom properly. She’d laugh hysterically. You’d have sex. Endless sex that went on for hours despite me literally just calling it endless. Anyway, I’m not sure where any of this is going. Sorry.