Including one where these cats played 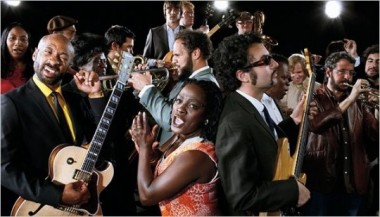 This might sound like sacrilege to some of you but I’ve always much preferred listening to records being played loudly in bars to watching bands going at it in venues. I like dance floors more than gigs, I’ve said it, it’s out there, I’m just complicated, contrary, sexy and unusual like that. That’s probably why girls find me irresistible and blokes think I’m unfathomable – a word that I’ve literally just realised sounds like someone with a lisp struggling to say “unfashionable”. GOD I’M HILARIOUS. Anyway, let’s not all try to work me out, I’m too complicated, it would take too long, we’d all get really turned on. Instead just allow me to list a few live music events that I’ve actually enjoyed. Oh yeah, and I’ve got Kate Bush tickets now, so she might be on this one day too…

This was a very significant moment in my life. To paint the picture: it was the mid-90s, I was at a festival called Roots Day or something cool like that, I was wearing baggy trousers and an expression of near-constant fear because I was in London for the first time and convinced that everyone was a rapist, but all of those fears dissolved like Berocca in a bath tub as I watched three hip hop heavyweights rapping together on stage like the Traveling Muthafuckin Wilburys. It was INSANE.

I’ve seen these guys two or three times now and I’m off to see them again in June hoping for more of the same funky stuff, but this particular installment stands out because it was the first time I’d even heard of this Sharon Jones chick and after the show she walked from the stage and made a direct beeline for me and I got a massive cuddle. By which I mean I dashed up to her squealing incoherent compliments and then begged her to sign my tits.

Me and my homeboys often set aside time in our hectic work/life schedules to get together, open our hearts to one another, and then cry together over a meal and a few pints of lager. It’s an important part of modern male friendship, and on one memorable occasion we staged our bonding session at the Jazz Cafe in North London so it could be interspersed with jazz funk played live by The Blackbyrds – those cats played the shit out of their instruments that night, and by cats I mean musicians. It’s slang talk. You could barely hear us all weeping.

By now you’re probably sensing a theme and you’re absolutely right, I am one of those middle class white guys who likes to impersonate middle class black guys by jerking a bit of chicken and listening to Miles Davis on a Sunday morning. It makes me feel alive and vital, as do the conscious raps of Common who I saw live at The Jazz Café once. He was wearing a straw hat, the fucking maniac.

The reasons why I love Gregory Porter are many and multifold. He’s got a voice like fresh syrup dripping down a beautiful drainpipe, he dresses magnificently, he seems to be wearing the furthermost part of a wetsuit for some reason, he sings songs that make me want to go all the way to The Royal Albert Hall to listen to them. Hence that’s exactly what I did and I took my woman with me. Afterwards we were so high on life that we made loud and passionate love on a mountain for eight consecutive days.

Vast portions of my life are just a fug and blur of occurrences that I can’t quite piece together geographically or chronologically, not because I’m a roving Bukowski type character who’s off my face, more because I’m just not very well organised and I get a bit forgetful sometimes. I do know, however, that at some point in 2008 I went somewhere or other to see the legendary reggae rhythm section Sly and Robbie taking their instruments for a walk around the block. Whichever one is the bassist (Robbie?) is now a fat man in a flowery Laura Ashley dress.

Soundtrack of Our Lives – Shepherd’s Bush but not The Empire, possibly 2010

I think the actual venue for this gig was Bush Hall which is a lovely place just up the road from Nandos on the Uxbridge Road. I used to live near there and one night there was a gunfight IN NANDOS. An actual gunfight with guns and people eating chicken and helping themselves to unlimited glasses of Fanta while criminals shot each other in the face. Since then Nandos have very sensibly introduced a No Weapons policy. Anyway, my friend Alan took me to this and it was fucking loud but very invigorating, and it involved Scandinavian dudes with big hairy faces and bollocks.

I confirmed my status as a hipster earlier this year by going to watch this all-female post-punk group performing their thumping bass tracks while a roomful of blokes with identikit big beards and pomaded haircuts all jerked along slightly off-beat. I loved it, my wife absolutely hated it but she hasn’t got a beard.

I’ve drunk warm lager from plastic pint glasses while people bash into me from all directions, I know how you rock people roll. And one time in 2004 I went to a night in a tiny club organized by my pal Emma and saw this group of proto-mods and they blew my mind before vanishing without a trace. On the very same night (I think!!) one of the Kings of Leon asked me if I had any acid but I didn’t so he just looked at me, tutted and then walked off. Fucking limey with his no-acid.

India.Arie – Hammersmith Apollo, I think in 2001

I remember a few things about my evening watching India.Arie in Hammersmith. Firstly that the famous actress Tamzin Outwaite was sitting in front of me and she looks exactly the same in real life as she does on TV, only fractionally smaller and, like all actors, with a slightly larger out-of-proportion head. Secondly I was with my old buddy Hip Hop Sam. And thirdly, it all got a bit ridiculous when India started wheeling out harps and lutes to show how musical she can be.

What’s the best gig YOU’VE ever been to?