My quest to find James Brown Live at the Apollo 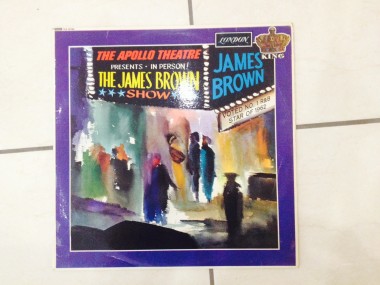 One of my favourite films when I was a little boy was Jason and the Argonauts, which I must have watched four or five thousand times between the ages of 5 and 15. It had everything – massive boats, some dude with a beard, Ray Harryhausen bringing skeletons to life for swordfights. It really was absolutely excellent, I have no idea what happened in it. I know Jason was after a Golden Fleece for some reason, but what that was and what happened when he finally got it are childhood memories that have dissolved like a tablet of disprin in a glass of my mother’s Skol. Fucking hell I’m good at imagery.

Anyway the reason I mention this glorious old road movie is because, like Jason, I once had a Golden Fleece of my own, only mine wasn’t a swishy winter jacket, it was a classic record by James Brown, one which was said to be the catalyst for a million excellent things. The minute I heard of it, I wanted it – it was James Brown Live at The Apollo, released on King Records in 1963, it sold a shitload at the time, but it was proving elusive and impossible to track down like a raven in a field of other identical ravens or like an invisible elephant surrounded by invisible pigs. I was a guy in his early 20s with zero money and no access to the internet – this was back in pre-eBay and Discogs and Amazon times, a dark black and white era when most decent record shops dispatched their stock information via the Royal Mail. I KNOW RIGHT! THAT SOUNDS INSANE! BUT IT’S TRUE.

For years I fantasized about finding it, about boasting to the two or three friends I had who would give even the remotest shit about it. Gloating in front of them, showing it to hot girls who might find me sexy for being all soul musicy and alternative. I was Jason, it was the Golden Fleece, my Argonauts didn’t necessarily exist but the quest element was definitely there. I’d even stumbled down some foggy back alleys and experienced numerous false dawns on my journey, like when I found Live at the Apollo Volume II in a tiny charity shop going for pocket change – which was an absolute steal itself – I’d spent hours that stretched into days flipping through an endless conveyor belt of old vinyl sleeves that you could compress into a really excellent movie montage if you wanted to. You never know.

But the point is that owning this prized and game-changing record on vinyl became an obsession for me. I’d first heard ABOUT IT – I had never actually heard a cut from the record because Youtube wasn’t around yet – when I was 16 or 17. The actual finding of it was a good five or six years away. But find it I did, and predictably it wasn’t in some tiny out-of-the-way second hand shop owned by a clueless old biddy and going at a preposterously low price, it was in a specialist soul music place in Soho, marked for sale at seventy quid. I’d been flicking through album covers in the downstairs bit, I’d gone past all manner of Roy Ayers and David Axelrods, I never made it as far as the Donald Byrd section because time suddenly slowed and warped as my eyes eased out of my head on little tiny storks. James Brown ‘Live’ at The Apollo. The place was London, the year was 1999, the person was me. Fucking hell. I’d seen the cover before in a magazine, there is no feature of the man himself, just an artistic impression of how the Apollo Theatre in New York might have looked on that fateful night if you happened to be there. It would normally come framed by clearest white but this copy was framed in a deep blue because it was the UK release of the album which affiliated London Records with King. GOD I’M BORING. I told myself this probably made it ever rarer. I had no actual job to speak of, I was only in London to do work experience as a shy tea lady at FHM, I had literally no money apart from around £100 set aside for fags and lager and cheap cheeseburgers in that order – the intention was for that to last me for fuck knows how long until someone might actually finally pay me for being alive.

It was simultaneously one of the greatest, most satisfying and one of the most sobering moments of my life – akin to being sexually propositioned by the world’s most beautiful woman while being insanely in love with your wife. What do you do? You can’t justify it. Can you? My heart thumped in my throat and thoughts chattered in my brain like a crowd on a delayed tube platform harrumphing and debating what to do next, then I suddenly unleashed my genitals from their material cage and went for it on the shop floor. By which I mean I asked some dude to look after it while I nipped out for some money. My hand trembled at the cash point as I typed in a ‘7’ and a ‘0’ in the ‘other amount’ bit. What Jason had sacrificed in good men I was clearly about to relinquish in bank notes – this meant it would be roll ups and no food for the foreseeable few years. It was the end of the last millennium and I was living out one of the dream moments for any collector of music – the unexpected discovery, the culmination of years of trawling through basements and upstairsy bits. A moment of pure orange squash sunbeams that might be lost these days thanks to technological advancement and everything.

I left the record shop clutching my new purchase in a bog standard plastic bag when all along I’d envisaged this moment to feature a hilltop parade with me holding the sleeve aloft like Simba at sunrise. Unfortunately I was in London for the first time so I was still convinced that most people were either thieves, drug dealers or prostitutes. I smuggled it through the streets like a bagful of uncut diamonds and eventually got it back to my then-unpaid day job at FHM. I showed the Music Editor what I’d found with a look so smug on my face that you’d think I had a twenty-inch penis dangling heavily in my twisted denim jeans (rather than just the 12). “Oh right, that good is it?” he wondered aloud without even being remotely bothered, unwittingly removing a handful of coils from the spring in my step. IT COST ME SEVENTY QUID! I wanted to shout but didn’t. My penis also shrunk considerably a few months later when the record was reissued on vinyl selling for less than a tenner.

But, BUT, while the reality of finally owning the record – which, FYI, is absolutely the GREATEST live performance of all time – could never live up to the fantasy of searching for it and finding it, the quest took me in many different directions, it led to brilliant records by other artists, I wouldn’t have discovered The Meters or Kool and the Gang or Curtis Mayfield or any number of brilliant soul singers and funk bands without hearing about this first. I’m sure that Jason probably found loads of different fleeces along the way too, some which might have even been better than the silly golden one he was obsessed with and finally got to (probably, like I say I can’t really remember). And how appropriate is it that Jason and the Argonauts was also released in 1963 just like James Brown Live at the Apollo? It’s almost like all of the clouds aligned just for me to write this piece 51 years later! Or is it? Anyway MOST IMPORTANTLY I realized that as a collector you always need that Golden Fleece, that reason for getting out of bed in the morning, preferably you need a whole stack of Golden Fleeces to keep you going for a lifetime. And that’s basically a really long-winded way of me saying that my current Wants List is at least 100 rare records long.

Now enough of my self-indulgent bullshit, Ladies and Gentlemen, this is JAMES BROWN LIVE AT THE APOLLO!….