There I am, being a massive tool 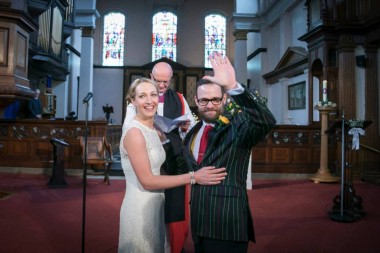 I got married last year and it was a big deal because I’d never got married before and for years I’d insisted that I wasn’t the marrying kind. The reasons for that being manifold, but primarily because before I met my now-wife I hadn’t felt the urge to spend the rest of my life with someone else, also I’m not a fan of formal situations and I don’t have much money. Plus, in the spirit of full disclosure, I was fucking petrified and it was around the umpteenth time I’d googled some variation of “pre-nuptial mental breakdown” that I realised there isn’t much out there to comfort and inform nervous men before they tie the knot. Brides are well catered for, they’re awash with excellent advice, they could bathe in the stuff. Plus they’re great looking and they get to cry and wear lovely white dresses – it’s a day at the races for them – but grooms are supposed to be manly and macho and able to suppress their emotions to look rock solid and self-assured. I was neither of those things, I was flannel soft like a towel you’d just fished out of the bath and I was the exact opposite of self-assured but I couldn’t tell anyone that because it would make me look like a massive pussy and I might start bawling.

Anyway, let’s rewind to the end of 2011 when I dropped to one knee and charmingly proposed to my girlfriend in a Hong Kong hotel room wearing just my pants which were home to a very presumptuous semi-erection – that was a fun day, so full of hope and joy, and as I recall we then smeared ourselves in baby oil and made loud steamy and passionate love on a mountain top for the next four days solid without even stopping to rehydrate. Of course she cried euphorically and said yes when I asked her to marry me, she was very sweet and even pretended that it was unexpected even though I’m pretty sure she’d somehow orchestrated the whole thing. She’d burrowed into my mind, got under my skin like a beautiful siren, planted little seeds that made me – a moderately shy man who definitely shouldn’t be allowed to do speeches – agree to comb my hair, trim my beard and possibly my pubes (I didn’t), then publicly declare my undying love for her in front of lots of people who would definitely be willing me to faint or puke (or preferably both) during my big moment.

Once the thrill of the proposal had waned we then talked about arrangements and settled on a date for our big day which we agreed would be about a year and a half away, in May 2013 – this was great for her because she got to wear a pretty ring with a real diamond in it and talk to her friends about food and music and seating plans, and great for me because I got to put a big X on a calendar in permanent marker and then have a gently simmering panic attack for almost two years. At this stage I should point out that my fear of being thrust into the middle of the room to stand in front of people probably veers into “slightly irrational” territory from time to time, but the reality is that I was scared like a wounded mouse trapped under a tea cup, and yet I’m close enough to the “normal” spectrum of human behaviour to suspect that lots of other men feel nervous about their wedding days too.

The clock ticked and tocked, the world span amazingly and miraculously on its axis, and years became months and months became weeks and weeks became days, and with each passing one my mind became more addled and it tricked me with brand new worries. I was excited about the thought of being married, my woman was (and is) perfect for me, but getting married was the problem, the obstacle of this one single day loomed large like a big zeppelin with DOOM scrawled on the side of it in blood. God I’m good at imagery. I had butterflies in my stomach, my friends and family would be there, her friends and family would be there, one or two stragglers would probably be there. We’d have a vicar, a bloke doing wild organ solos in the church, bar staff at the venue, waiters, we’d booked a photographer, a driver for the big red bus getting us from Point A to Point B. This wasn’t just a list of people due to attend the most gorgeous and beautiful day of my life, it was fast becoming the audience for my greatest social demise yet. It would possibly become a Kill List if things went really really badly.

I’d thought about it long and hard and with completely unnecessary devotion and I’d decided that my great humiliation would start at the front of the church on that Saturday lunchtime. I’d have made it there with a greying face after walking with concrete legs across Clapham Common, people would be talking to me but I’d only hear a hollow echo of their voices. The organ music soundtracking my meltdown would begin, the guests would rise from their seats cooing and muttering while my stunning bride walked gorgeously down the aisle like a sexy angel in a wedding dress.  She’d be greeted by a trembling gollum with gallons of sweat gushing down his face and spraying sweet hell from his armpits, fear in his eyes, his knees shaking – bashing together like judge’s gavels. Everyone would crack up laughing, and then all or some of the following scenarios would definitely happen:

There was another version of Option 2 that I couldn’t bear thinking about. I was sure it was going to be a disaster, but then something very peculiar and unexpected happened. It got to D-Day, the date set in permanent marker on my calendar, and as I’d seen in my mind’s eye over the last few months a small crowd flocked wearing suits and dresses and one or two wore nice hats. There were family members and a vicar and the old dude at the organ, the bus was on its way and we had eighty odd booked in for lunch, it was all as planned but something was missing from the equation, and that was the predicted sensation of deep crippling fear. I wasn’t remotely scared, my hands weren’t sweating, my face wasn’t ashen and I could actually hear people clearly. If anything I was full of joy to the point where I sought the limelight, I was pleased to see everyone and I desperately wanted a big showy-offy wedding day. At one point I turned around to wave at the guests as we made our vows, and later that afternoon I even defied the laws of all logic and clear-thinking by managing to do an entire speech without projectile vomiting all over my new wife and her shocked mum.

It was incredible, genuinely the most fun and enriching day of my life, and now Valentines Day is approaching and I suspect that lots of guys will spend their evenings searching for the right moment to pop the question, and some of them will then retire to a quiet corner of their minds to sit anxiously like men in doctor’s surgeries convinced that the diagnosis is terminal. But luckily for them I’ve been there, done that and finally here’s some actual solid advice for anxious grooms from someone who knows what they’re going through:

CHILL. THE FUCK. OUT.