The Top 9 things on your Christmas plate in order 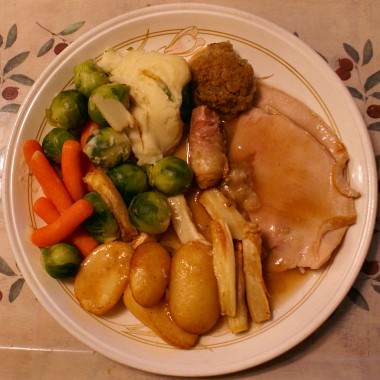 Face it, by the time you get to actual Christmas Day you’ll have eaten at least three Christmas dinners already – your work one, the one you had with your mates, there might be another random one you had with your footie team or your sewing circle or your code-breaking unit or your fight club or your science and maths group, plus you may have enjoyed any number of Christmas concept sandwiches from Pret a Manger or Boots. Damn it man (or woman) you know this meal like the back of your hand (or vagina), which is why I’m now going to list the nicest parts ranked in reverse order from worst to best. Question is, do you agree with me? Let me know in the comments section…

9. Sprouts – these might look like fun baby cabbages for Borrowers or midgets but unfortunately it’s all a sick elaborate ruse because these don’t taste of cabbage at all, they taste of how a football ground toilet smells just before the second half kicks off. Unless you finely chop and fry them, then they’re lush.

8. Cranberry Sauce – in at Number 8 is Cranberry Sauce which is neither sauce nor jam (which is immediately infuriating), and it’s fashioned from an unpopular fruit mainly used to cure stingy urination disease (SUD). At best this tastes like melted wine gums, at worst you’ll have Vietnam flashbacks about pissing fire.

7. Parsnips – no one knows exactly what a parsnip is but they were presumably used in Elizabethan mimes to represent either peasant penises or witches noses. Whatever way, they’re okay, just not as good as other vegetables like cauliflower.

6. Turkey – that’s right, the star of the table isn’t the star at all, just another supporting player. In fact I might be wrong but I think according to the bible the main reason we eat turkey at Christmas is because it’s the only roasted animal that doesn’t openly practice Christianity during the rest of the year. It’s also quite dry.

5. Red Cabbage – for 364 days red cabbage is obliterated in the polls by green or white or Savoy cabbages which are all considered a far more mature option for your meal, but once a year these guys get a dizzying blast in the sunshine, by which I mean they get drenched in vinegar and shakily spooned into your mouth by your insane nan.

3. Stuffing – according to food historians stuffing dates back to Roman times when Emperors would insist of having animal vulvas and anuses masked from their sensitive eyes by filling them with the ground meat of other beasts along with herbs from up in the hills and the breadcrumbs of stale ciabatta loaves and some dried fruit and salt and pepper. Plus occasionally porcini mushies. And lo the humble working man’s “stuffing” was born.

2. Bread Sauce – whenever I see a carefully applied teardrop of bread sauce on my Christmas plate I weep – first happy tears because I love it so damn much, then bewildered tears because I’m drinking Port and I don’t know what’s happening.

1. Pigs in Blankets – these are the star of the plate. They may look like chopped-off giraffe cocks wrapped in monkey meat but don’t let that fool you, they’re amazing. They taste exactly how you’d imagine, on the assumption you’re imagining a combination of sausage and bacon.

Then obviously GRAVY. Now, any more for any more?