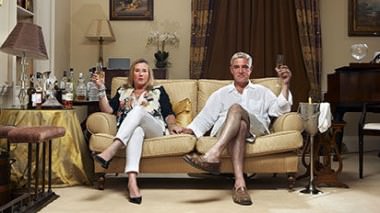 Vodka Lime and Soda – Not really a cocktail, this one’s really just a list of ingredients that you put into a glass and then add ice to. It doesn’t taste very alcoholic and it’s probably really good for you so you can drink this through the lunchtime eps of Neighbours and Home & Away and long into the afternoon. The lime will awaken your taste buds and you’ll never feel more alive.

Rum and Coke – The classic aforementioned VLS is favoured mainly by gorgeous girls with great boobs and a nice bod so if you’re a dude you’d be more likely to throw one of these back while your large penis dangles enormously in your trousers as per usual. The addition of the sweet cola will stop you spluttering strong rum out of your nose on the very first sip. Goes well with a shit episode of Eastenders or a surprisingly good Emmerdale Farm.

White Russian – Hands up who loves The Big Lebowski. Hands up who was once a student at a university. Hands up if you put your hands up twice in a row just then. Statistically 100 per cent of ex students currently have a hand in the air. I have no idea where this paragraph is going. Anyway I enjoy these with Kahlua, Vodka and semi-skimmed milk from the Costcutter downstairs. A few of these and I’m your best pal, a few more and I’m vomiting milkshake through my hands and shouting “WHY DID YOU LET IT GET TO THIS??” You should have stopped me after three to be honest. This really is your fault. I’m serious.

Poor Man’s Kir Royale – If you’ve ever been to a cool dinner party you might have noticed that all the men are rocking bow-ties and comparing massive watches while the chicks are snorting like big sexy pigs and guzzling fizzy Ribena from a wine glass. Only it’s not Fizzy Ribizzy friend, it’s champagne and cassis, but as no one can afford champers these days with the whole political climate just get a bottle of bog standard budget sparkling wine instead. You’ll still get to where you want to go. Assuming that you want to go to a place where laughing hysterically throughout Surprise Surprise is considered normal.

Amaretto Sour – Oh right you’re still reading? This is highly unexpected. Okay since you’re still here and eager to learn here’s one that goes well with an episode of Newsnight or Question Time. It’s two parts Amaretto to one dash Angostura Bitters to one part liquid sugar to one part lemon juice to a few parts soda water, and some daft fuckers sometimes chuck in an egg white. Three of these and you’ll be getting off with your own hand while people in Portsmouth moan about unemployment.