I have no memory of these people 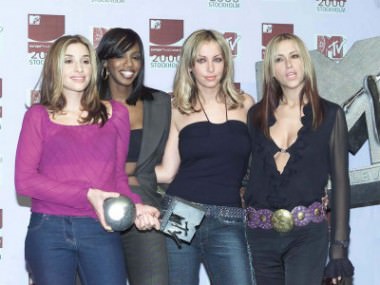 “Hi Josh” started the email following my trip to the MTV Europe Music Awards in Stockholm in 2000 (or 2001), “Welcome back. I’m hardly dancing on the table after reading your copy, what happened?” Even then I was a masterful wordsmith.

It was a very good and understandable question – what had happened? For a few days we chiseled and tweaked the extraordinarily flimsy copy I’d filed, we cobbled together something from pap shots and attempted to make my ridiculously weak insider observations sound interesting, although they were mainly pearls like “Robbie Williams was wearing A SUIT” or “I overheard someone saying something about Ronan Keating to someone else but I couldn’t quite make it out”. The truth is even I don’t know exactly what happened at the MTV Europe Music Awards in Stockholm in 2000 (or 2001) and I was there. I basically got mangled and woke up and came home unsure of how to explain what had just gone down.

So let’s now rewind through the mists of time and I’ll recount the tale as I remember it. It was the year 2000 (or it might have been 2001) and the world was a totally different place. I owned a pair of Sta-Prest jeans. I was set to cover the MTV Europe Music Awards for both more! magazine (RIP) and Just 17 (also RIP), they were splitting the cost of getting me there and back and using my remarkable writing skills, my brief was to get wild and exciting quotes from the people we thought were cool like Robbie Williams and All Saints. I was a fresh faced showbiz reporter in inverted commas with about zero experience so far, and I’d barely even been on a plane before so going alone to Sweden was immediately invigorating. I got drunk midair and I smoked at airports because you could do that back then.

When I got to Stockers I was put up in a local hotel and invited by the good people at MTV to go along to some drinks parties. I’m zipping through the early bits because I can’t remember them so well, all I know is that I was there for a night and a whole day before the awards so there was time to kill. I ordered lobster on room service, I enjoyed the rich variety of Swedish grot on offer at the hotel, I went to a free drinks party where I knew precisely no one so passed the time watching hot models handing out complimentary booze, and then Kelis turned up to be adored. I was drunk and I knew I should say something to her, but before I could pile in with an arch quip about her milkshake definitely bringing the boys to the yard, I remembered that it wasn’t 2003 yet and that single hadn’t been released. Truth is I froze and watched as other journalists goaded me with their breeziness and just wandered over and got their quotes and wandered off. I bottled it and went back to the hotel, got another lobster (because you know fuck it!), and I probably went to town on myself because I was in my early-20s, drunk, alone and in a hotel room.

The next day went something like: big walk, Stockholm’s pretty, I ate a local sausage which isn’t a euphemism.

So to the big night itself and this is where things start to go really really even more blurry and annoyingly some of it will sound like total bullshit but I promise you it isn’t. All of this is the absolute truth as I know it. The awards were being held in a massive arena in the middle of the city as you’d expect and as I stood alone and smoking heavily in the queue for media people a real life person started talking to me. I’d barely uttered a word for 24 hours so I was initially shocked and panicky, my voice was croaky from underuse but I soon got into the groove. I remembered how conversations went, he’d say something, I’d say something, I also realized that the beers I’d had in the hotel room to get in the mood had made me a bit drunk already. Didn’t matter my new pal was all over the shop. He had better seats than me he bragged, he was going out with someone who worked for MTV, he’d smuggled some drugs over on the plane, and he was staying at the hotel where all the stars were staying. OOH OOH WE SHOULD GO THERE IN A BIT! Groovy, we possibly high fived or chest bumped. I fucking loved this guy.

For one night only we became inseparable and he was honestly the best friend I have ever had and I can’t even remember his name. Neither can I remember the awards ceremony at all in any way whatsoever apart from I do know that Robbie Williams was wearing A SUIT, I think we spent most of our time gassing and throwing back pints of completely free continental lager handed out by more models. Or just normal bar staff, I couldn’t tell anymore. It was his idea to then get a head start on the others going back to his hotel because that’s where the big party was happening and chancers would be bum rushing the place. Chancers, I laughed, FUCKING CHANCERS.

“You can come in as my guest” he chirped or slurred as I threw my arms around him and probably kissed his ear. So go back to his big swanky hotel we did, and once there we sat elegantly by the piano in the bar bellowing along to whatever tune the hotel pianist was playing. He loved us, he started taking requests, and after about an hour of this we were joined in the bar by Bono and The Edge from U2, who looked on nodding their heads, hugely impressed by how cool we were as our crew (it was a crew by now) did a very inspiring and shouty version of My Way. By then I’d taken to chucking back complimentary whiskey, the upside of which meant I felt fabulous, the downside was that I wasn’t remotely bothered that I was singing around a piano in front of two legendary rock stars from a band I don’t like. *I shoved Bono out of my way and grabbed another glass of something.

(*that may not have happened)

“Hey man, let’s fucking go to the fucking party now” burped my nameless pal into my nose, and that’s exactly what we did in a roundabout slightly-complicated kind of way. Problem was we couldn’t get into the actual party PARTY because you needed some kind of exclusive wristband and they had gigantic bouncers on the door who could tear my face off my skull like they were taking the wrapper off a Quality Street, so instead of attempting negotiation we formulated an unbeatable plan and headed up in the lift a few floors to see if there was a way of breaking into this damn thing without encountering any huge dudes. How hard could it be?

As it turns out not remotely hard at all, it was a piece of piss. We hit the umpteenth floor of the hotel, we dragged our ears along a corridor listening for party sounds, and eventually found them loud and proud behind one of the doors. “It might be locked…” I began speculating, as my new buddy flew though the air shoulder first and smashed through it with ease because as it turns out it was already a bit ajar. We were in, we were at the party of the year, only we’d misjudged the precise geography of this gargantuan hotel bash and rather than finding ourselves strutting onto the dance floor like a couple of proud cocks (or just cocks) or by the bar with the rest of the normals and chancers, we’d somehow crashed the VIP area where you needed and extra-special gold plated diamond studded wristband to get in or out. So we were there at the party, but we were stuck with all the famous people and their various coked up managers, and I’m fairly sure that by this point I wasn’t making much sense and my bezzie mate was already slumped asleep or possibly dead in a chair within eight seconds.

I was flying solo now. I slalomed gracefully through a relatively empty and spacious room to the bar, grabbed a glass of something and never saw my best pal ever again. With a forgetful mind I’d already completely lost the chair he was napping/dead in and had no idea how long we’d been there anyway. A minute? Two hours? I was suddenly in deep conversation with Mel B from The Spice Girls, and then in walked Kelis and I finally had the stones to corner her for a chinwag which I imagine she enjoyed immensely. I have a horrible feeling that I pointed at her hair and Mel B’s hair and shouted “SAME HAIR!” The Backstreet Boys were there and I made all twelve or thirteen of them laugh, the tall one with the demi-beard hugged me out of his way. I was in a headspinning version of Madame Tussauds and on dynamite form, promising myself I’d remember every quote and every joke and every word of everything from this the greatest night of not just my life, but ANYONE’S life – this was going to win me some kind of Pulitzer Prize or Turner Prize or an Oscar. This was amazing. I was amazing. I may actually have been the greatest journalist of all time. MORE WHISKEY! My brain went hurty, I held a wall. Some corridors whizzed past me, I went round a merry-go-round and cold air hit my face, I possibly bumped down on some pavement. An engine, I heard my voice say something loud over and over again.

I woke up fully clothed on my hotel bed next to a plate of bright orange lobster shells with not a single lucid memory of anything in my mind.

“Hi Josh! How was it?” asked my boss as I sloped into the office a day or so later.

“I saw Robbie Williams on stage and he was wearing A SUIT!” I beamed.