I went to see Enough Said, here’s what I say 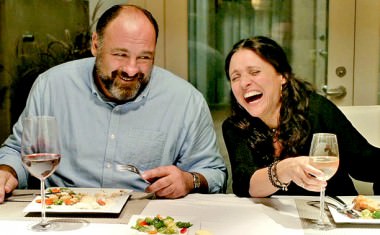 Don’t be fooled by what your mind’s eye tells you, my life isn’t all cocktails on rooftops and rampant sex marathons with models. What you’re doing there is thinking of someone from a movie or from the TV show Entourage, I’m neither of those guys. I do simple things like eat Sultana Bran or wash my face, for the most part I pay to go to the cinema, except for a few weeks ago when I got to take my good lady woman to the pictures for free. We were cordially invited to a screening of the latest James Gandolfini flick, RIP etc, so we duly went to it, and here’s what happened…

It started when someone emailed me a screening invitation – I usually say no to these things because they’re always scheduled at preposterous times in the day like 9am or 4pm when I am either on a tube, in bed, muttering to myself or eating a chocolate digestive and having a cup of decaff tea. On this occasion Enough Said was to start at 6.30pm which seemed reasonable and kind so I said YES PLEASE, scored a seat for my wife which she found very impressive and probably a massive turn on, then we headed to a small screening room in Soho. I’m aware at this point that most people haven’t been to small screening rooms in Soho – because why would they? – so I’ll paint a picture of what that’s like. It’s really lovely. It’s how you imagine an incredibly rich person would watch normal television, in a room that’s full of big comfy seats and probably about a quarter of the size of a smallish cinema. Everyone in there has notebooks and a look called journalist chic, you’re asked to hand in your phone to a security guard so you don’t suddenly start filming the thing like you’re Martin Scorsese, and you don’t get trailers or any of that bullshit, it just starts. We arrived with a big bag of sweets and a couple of Ribenas looking exactly like people who were going to the cinema for free.

I was particularly excited about this movie because it stars two people from two of my favourite TV shows of all time. Playing the female lead was Julia Louis-Dreyfus who I fell in love with many years ago when she was Elaine in Seinfeld, then her romantic interest was to be played by Tony Soprano, who I also fell in love with a long time ago – for me this was already a match made in heaven and I said as much when I leaned over to my woman, took a wine gum, and muttered “this is a match made in heaven for me”. I put it in my mouth. She wondered what I meant, did I mean the wine gum? How would that work? I pointed at the faces of the people I’d just mentioned, she then put a wine gum in her mouth in agreement. She knew what I was saying, she knew what I meant. And lo the movie began and everyone shut the fuck up on cue to enjoy it.

And enjoy it we did, if not quite at the four star rating everyone appears to be lavishing on it at the moment, but at a solid three stars out of a possible five. I’m not really one of those movie critics who likes to intellectualise people’s minds with too many reference points because let’s be honest I’m not really a movie critic, and I don’t want to give away the story, but there’s a trace of poor man’s Woody Allen in there and the leads are both great – she’s likeable, he’s gentle, and all in all this meandering romance between two middle aged divorcees was quite lovely and we emerged from the screening room in a cheerful mood ready to make the most of Soho’s drinking and eating facilities, which is basically all you want from a cinema trip isn’t it?

So off we strode for a couple of cheap beers and then some cheeseburgers in a place called The Soho Diner on Old Compton Street. Now that place was a massive pile of shit.