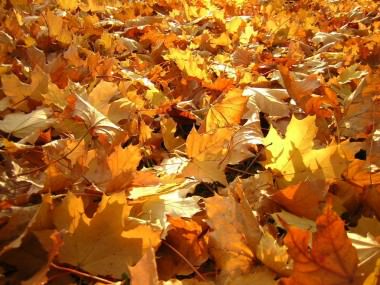 It’s taken a while for this year’s summer to fuck off, but now it officially has. I know that because I wore shorts this morning to go to the shops and everyone pointed at me and shouted YOU’RE INSANE or HEY TRAMPO! It really hurt my feelings. I’m not insane or a tramp, I’ve got a fucking blog and a beard , so what? Incidentally, this is neither here nor there, but if ever you’re looking for kicks and you are walking past a tramp just say “ha ha! Good try Mr Bond!” and then studiously gauge his reaction. You might snare yourself a double agent and get a reward from the Prime Minister. You never know. Anyway what was I saying? Yes, Autumn, Autumn’s groovy and here’s a short list of reasons why. Please feel free to add your own in the comments bit…

You get to wear jackets again
Much as I enjoy the sweet sensation of airy cotton fluttering breezily around my naked body, that never actually happens in my life ever. Especially not during the summer which is mainly spent with me doggedly peeling sweaty t-shirts up my back, fanning my face, and wondering whether the moistness between my bum-cheeks might be something more sinister. But that doesn’t matter now because it’s Autumn, and Autumn is vibrant and cool like a guy with bonkers hair or an androgynous girl you once met when you visited Hackney in East London in a dream. Plus you get to wear jackets. Everyone likes wearing jackets. Especially jean jackets. Although I don’t have a jean jacket.

You don’t have to go out all the time
It’s a drag being indoors during summertime. Everyone’s out playing street volleyball in the coolest new leopard print speedos and all the girls are wearing hot pants that chew all the way up their anuses and into the lower echelons of their spines – if they stand facing you there’s a good chance of vagina-wedgie which was once unheard of. Anyway the point is it’s no time to be alone belting out Whitney Houston songs into your bedroom mirror if you’re a girl or alone rapping into a hairbrush if you’re a guy, you need to be out there, girlfriend/boyfriend. Unlike in Autumn which is the perfect time for in-the-mirror singing/rapping. Although, saying that…

Pubs are nicer after September
It’s true. When there isn’t an ever-increasing Blob of beer garden dickheads shouting AWESOME like a giant amoeba that’s reproducing asexually but only creating pillocks, you’ll find that some pubs can be gentle relaxing and fun again. Nice to be in even. You can drink brewskis and talk about your feelings, you can discuss whether buying a bike would be a wise investment or make you look like a hipster. You can speculate about the future or remember the past. It’s great. Unless you happen to part of the Blob, in which case fucking hell dude, pubs suck!

You get to eat stuff like Shepherd’s Pie or Fish Pie or Cottage Pie
Not one person has ever rolled out of bed, pulled back the curtains/drapes to have hot sunshine flood the room like a tsunami of orange squash, and thought to themselves “mmm, this is PERFECT shepherd’s pie weather” – that would be absolutely bananas. So okay, FACT ONE: In summer you don’t eat, you graze, you find small areas of grass and you keep topping yourself up with continental meats or olives. FACT TWO: see FACT ONE and reread it. FACT THREE: repeat FACT TWO. But in Autumn out come the knives and forks again, plates you can smash and it’s time for a conveyor belt of pies, none of which are made of pastry. It’s all fucking potatoes man.

You can go for nice walks
Walks are boring for at least nine of the twelve months that make up the Western calendar, or thirteen months now that we’ve officially recognised Movember and acknowledged that it won’t be going away even when they finally find the cure for testicle cancer. Guys just love to grow moustaches. Plus they’re hi.lar.ious, especially when they’re biker ones. But yeah, October and November are wonderful walking months. They’re also great for drinking hot chocolate from your favourite hot chocolateer. Mine’s a chick called Toni. It’s not really. (I don’t have a hot chocolateer)

You don’t need to water plants any more
They’re going to die. It’s the circle of life. Just turn your back on them and walk away, or keep your eyes on them and slowly walk backwards into your house without saying anything.

See? Autumns wonderful! And I didn’t even mention anything about crunching leaves underfoot. In your face conventional writing!