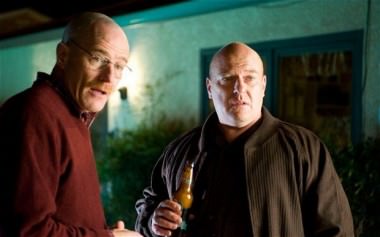 Breaking Bad ends next week, bringing to a close a dramatic juggernaut that started life when a cocktail napkin was found with the words “Mr Chips becomes Scarface” scrawled on it in eyeliner and somehow fell into the hands of a TV exec who then called the dad from Malcolm in the Middle who rang a guy he once saw on The Price is Right who in turn spoke to Larry Sanders’ old agent, and then the rest, as they say, is history. Being way ahead of the game I was watching this show back in 1987… anyway I thought I’d write a small list of lessons we can take away from Walter White and his friend Jesse and their other pals who have names that I’m not going to go into right now for personal reasons of laziness.

It’s up there with The Sopranos and The Wire and it’s your job to remind people of that
Struggling in a social situation with nothing to say? Lying in bed with a woman? Someone’s goat got your mustard? Can’t find your hat? Worried? Not sure what that last couple of questions meant? Good news neither do I, except to say if you want to make friends with the cool kids all you need to do is grow a patchy beard do your top button up and then earnestly tell them that you think Breaking Bad might actually be better than The Wire. And, dare you say it, even The Sopranos? Silence ensues. You cock an eyebrow, they hold their breath, you cock the other eyebrow. Fingers twitch, that silence remains, and now it’s palpable like a palpable silence. “Fucking hell man!” roars their leader, “your bold opinions about television shows are AMAZING!”. Everyone suddenly cheers and high fives you and the hottest one there offers you a blow-jay whatever that is.

If you’re going to sell drugs make them a fun and exciting colour
Somewhere between episode 4 and 22 Mr White saw fit to change meth from its cloudy-white frozen-semen shade to something more upbeat and vibrant, and exactly three eps later his electric blue braincharge was flying off the shelves in the “narcotics” aisle at Sainsburys. Take note marketing students. Colours work magic.

Don’t say ANYTHING on Twitter unless you want people to hate you
Veterans of Twitter know the deal. You either relentlessly praise people you don’t know in real life or you fuck off and say nothing. A third alternative is that you make desperate and frequent stabs at being funny so people might like you. But whatever you do don’t you ever EVER express your views on the latest episode of anything ever EVER without first checking that everyone on the planet has seen it already EVER. Here’s another EVER for the road. EVER.

Science teachers MUST TRY HARDER
When you’re a kid you think all teachers are squares who wouldn’t know how to undo a blouse to their belly button and throw back a bottle of Cinzano if it punched them in the solar plexus, but then you grow up and realise actually, they’re just people like you and me only a bit more boring in terms of career aspirations and conversation topics. Breaking Bad has also taught me that all science teachers could make great drugs if they would just apply themselves.

Lots of people seem to have Netflix these days
Back when I were a lad in Victorian times people used to sit around eating fistfuls of dung and talking about iron birds one day flying to the rock in the middle of the night sky, or speculating about an internet-based streaming channel where you can watch all kinds of movies and TV shows at the click of a button. And now look at us all, having Netflix.

Don’t spoil your marriage by becoming a drugs baron without telling anyone
I’m married and I know that the key to a good marriage is communication communication communication – sorry, I meant to say the THREE KEYS to a good marriage. Anyway, that’s why I call my wife literally the very minute I’m doing anything new with my day, be it going to the toilet, having lunch, thinking about having lunch, making a cup of tea, wondering what our third child would be called, calling back to check what the first two would be called, pondering whether to have a fourth child or whether to buy a cat instead and call it Peter or Gregory because that would be hilarious, giving a normal name to a cat. Sometimes she’s too busy to answer so I leave her a detailed message for later. My point is that you need to be on the same page, so don’t go and become a drugs baron then turn up one day and go “oh yeah FYI I’m a drugs baron now” and expect her to be all groovy about it.

Attempt not to leave bits of evidence around the house
For all his braininess and skills at coming up with masterful plans on the hoof, Walt’s Achilles Heel was his ego. Without it he’d have kept his trillions, the love of his family and possibly his hair. As it is he left a lovingly penned message reading “you make such fucking A1 blue meth Walter White, I adore you! Love the corpse Hank found xx” in his DOWNSTAIRS TOILET. It didn’t take Hank long to put three and three together.

To make people fear you occasionally lower your voice and say “I am the danger”
Probably the greatest legacy Mr White has left behind is the innate ability to scare people by walking slowly towards them without breaking eye contact, then leaning seductively into their faces, and then just as they close their eyes to go for the kiss you say in your gruffest whisper “I am the danger” then slowly leave the room. Impression made, you’re the best, let’s all have a drink and not talk about danger anymore.