As another year turns, here’s 10 NEW things I know 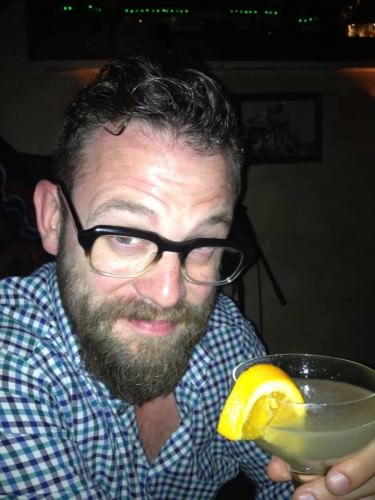 In 48 hours time I’ll turn 37, which means I’m three years away from 40, halfway through what would be a pretty decent knock, a third of the way through something quite spectacular, or a quarter of the way through something that would be absolutely mind boggling. Equally the fractions could be a lot less optimistic but that doesn’t bear thinking about. You just don’t know. My plan at the moment is to be the first person to make it to 200, at which point I’ll regale the planet with hilarious anecdotes about people drinking water from TAPS or actually putting their putrid little penises into each others smelly vaginas to make babies (EUCH!). Anyway, to celebrate the world spinning wildly for another year without me falling off it I thought I’d make a small list of things I didn’t know when I was 35…

It’s okay to drink cocktails now
Holy shitballs who ever thought it would be okay for a guy like me to sip something from a Martini glass! Look at me, I’m all hairy and unkempt, my hands are too big, I am dreadful at walking elegantly, I’m no Don Draper. Yet just a few months back I put away pints of weak lager for an evening and embarked on a wild ride through a menu of Cuban cocktails. Not only did I enjoy them and continue to do so now, but I didn’t end the evening by abruptly puking on the floor. I’ve really grown, you know.

The children really are the future
For a couple of days each week I descend on an office to make some proper bread in between banging my head against a brick wall trying to secure freelance work I can write in my pants, and I swear every week my bosses are getting younger. I’m not exaggerating when I say that last week my line manager waddled over with a big bubble of green snot inflating and deflating in his nostril and told me he was wearing big boy pants. Okay I am exaggerating, but I tell you what – those young folks are good at getting their doing done. And their doneing did.

I don’t know if I can stomach cool burger joints anymore
No one was more excited than me when cheeseburgers filtered down from hipster culture as the very greatest thing you could eat if you wanted to impress chicks. There’s meat, plastic cheese, buns – finally we could all enjoy great-tasting fast food at really weird prices. But now it’s just become stupid. There was a National Burger Day this week, A NATIONAL BURGER DAY – these treats have been elevated to a pop culture status that seems faintly embarrassing now… Oh who am I kidding! THEY’RE DELICIOUS! Let’s all open a pop up cheeseburgerie called Go Fuck Yourself. We’ll make it look how McDonalds would if Ronald had had his legs blown off in ‘nam.

Riding a bike isn’t just for other people who aren’t me
If you ever spot a bike helmet the size of Mars coming over the horizon ridden by someone shouting COMING THROUGH on a megaphone that’s strapped to their face, don’t freak out, chances are that’s me enjoying another paranoid afternoon on my new bike. I’ll also be wearing a fluorescent waistcoat, ALWAYS, because even if it’s the middle of a hot day and I’m in the park surrounded by absolutely no people or vehicles for miles you never know when the truck from Duel is going to suddenly burst through the scenery to ruthlessly plough you down and then do an ironic mocking horn honk while you lay in a crumpled bloodied heap… anyway what was I saying? Oh yeah, fucking bikes man. They’re brilliant.

Getting married is supercool
Five years ago I met my gal and back then I did all the cool stuff like leaning against a wall smoking a cigarette and saying things like “marriage is for losers” or “hey lady don’t ever try to tie me down”. In my mind’s eye she’d then lay there next to me on creased bedsheets stroking my really hairy chest wondering how to ever tame me or she’d ask me questions like “where are you?” while I looked into the middle distance, exhaling smoke even though I didn’t appear to have a cigarette, and generally looking like I’d seen some stuff. Real heavy stuff. But no. One sniff of true love and now I’m married and I LOVE IT. You get to wear a ring and have kissing practice ALL THE TIME!

Elderly American men dress superbly
Not bragging or anything but earlier this year I drove down the West Coast of America with my wife, and when I say I DROVE I mean that SHE DROVE, because a) I can’t drive. And b) if there’s one thing I like to do when I marry people it’s to have an immediately emasculating honeymoon where I go shotgun while my good lady woman does all the leg work. Some days I’d literally be swigging from a carton of Ribena in the passenger seat shouting IT’S TOO HOT just to make sure she knew she’d made the right decision during the “I dos”. Anyway none of that’s the point. The point is I saw lots of old dudes in slacks and Hawaiian shirts and thought to myself YEAH! I’LL HAVE SOME OF THAT.

No one should ever work a five-day week EVER
For many many years, by which I mean around thirty to thirty-five years, my general rule in life was that Monday-Friday were for working (I called them “weekdays”) then Saturday and Sunday were reserved for the drinking of beers and the ritual making love to of other people (those came to be called “weekends”). Occasionally you might dip a toe into the weekend during the middle of the week by daring to have a couple of drinks one night, or by having the gall to suggest a quick Tuesday shag, but generally the boundaries were set in stone tougher than the toughest stone you can think of. Or is it? This year I have plundered down from a full working week to something far more bendy and flexible and while I spend most of my time disorientated and stopping people in the street to ask them what year it is, I wouldn’t have it any other way. Seriously.

I like Nick Drake
I always thought Nick Drake was only meant for people who wear their jumper sleeves over their hands, and because I almost never wear jumpers I was certain he’s not for me. I was wrong. I bought one of his records a few months back. It might have been the album cover that drew me to it, it might have been because I have a bizarre compulsion that doesn’t allow me to leave even the worst stocked second hand record stores without at least one purchase, but I needn’t have worried, because this great happy accident has taught me not to judge books by depressing book covers. He’s actually really jolly. That said my favourite track is this one and it does tend to end with me exploding into uncontrollable heaving sobs in the kitchen.

If in doubt say “sure” a lot
Hey guys, here’s a great business tip – if you want people to take you seriously just nod your head and say SURE over and over again. I’ve been doing this for a year now and the results are unbelievable. I’ve had numerous book deals, some amazing job offers, I’ve got movies and TV shows coming out of my ass – by which I mean my ears – and the future looks set for superstardom. I am NOT overstating this. Although, truth be told, I am very much overstating this.

I think I might be a hipster, but now I’ve said that I’m not one. Or am I?
Most people seem appalled by the notion of being linked with hipsters, it’s now hissed like a knockout blow. And it’s a label that’s been flung at me many times lately, possibly because I have a beard, plastic rimmed glasses, Hawaiian shirts, I only buy music on vinyl, and I like to dine out at places where you have to queue for eighteen months and then get asked what you fucking want and you ask for a jam jar of beer and they bring it to you and you just say nothing because you’re not allowed to smile. But while I mount my defense and go on a verbal journey explaining how I never get invited to cool parties or any parties at all, and how I don’t live in places like Dalston or Hackney or wherever you’re duty-bound to live these days or how I don’t have tattoos, I then realise that because I don’t think I’m a hipster I probably am one. Although now I’ve acknowledged that I’m probably no longer one. But now I’ve said that I am one again… but now I’ve said that I’m not… but now I am. But now I’m not. But now I am. Now not. Now am. Now not. Now am. Now not. Am. Not. Am. Not. Am. Not…  I do enjoy watching Girls though.