There I am, being sniffed by a girl 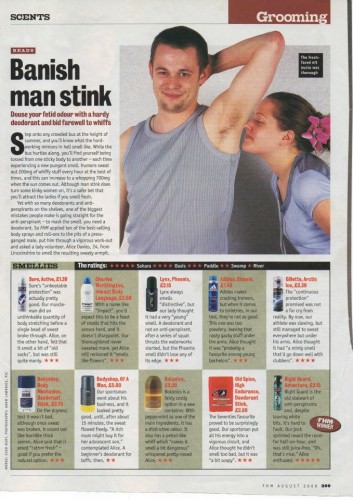 Lads’ mags are getting it in the neck at the moment and frankly so they should, blighting the shelves with headlines that read like THIS SUMMER’S BEST TITS, or 1000 LARGE BREASTS TO LOOK AT THEN GET AN ERECTION, or BUMS TO DRIBBLE OVER. Kids see this stuff. Impressionable kids who have minds like massive sponges that need to be filled with nice things like equality and poetry and the advantages of not punching people in the stomach to win arguments. It’s ridiculous. It’s literally like a 12-year-old version of me is editing a national magazine, and make no mistake “men” (or more likely boys) aren’t buying these things for the handy TV listings or the in-depth insights into sport, they’re sneaking them home, locking doors and shutting windows, then forming a crescent of their favourite boob and outlined-vagina shots and performing frantic sex acts on themselves using their own disgusting little hands – whilst, I should point out, simultaneously whispering profanities and objectifying beautiful women. Multi-tasking. It’s a revolting state of affairs that these almost-porn mags should be 100 per cent accountable for. And yet it’s particularly sad for me because I’ve worked at men’s magazines many times over the last fifteen years and I know that the people toiling on them don’t stride into the office every morning shouting “Oi Oi!” and slapping each other on the dick. In some cases the staff can be sensitive and intelligent and keen to write features with some meat on the bone – every time the next incarnation of a double-page spread of cartoonish large knockers is raised in a meeting a few thousand angels die bloody and horrible deaths, and everyone there also dies a little inside.

But let’s not let them off the hook that easily, these things still exist, the people responsible for them have the power and the duty to reinvent them, and that’s what they should do. If you’d indulge me, for reasons of extreme navel gazing I’m now going to tell the story of my time at FHM, which was like Zoo Weekly’s slightly older marginally less smutty brother who didn’t bother you quite as often. Afterwards I might suggest some ways in which these glossy magazines could become relevant and important again. I’ll basically be playing God…

So I’ve had three extended runs at FHM in my short and moderately unsuccessful writing career. The first time I went there was in 1999 when it was considered the very height of fashion to wear boot-cut denim jeans and Michael Jackson was still alive. FHM was riding the crest of a wave, at one time selling over a million copies in a month. I was in my early 20s, clean-shaven, no beer belly, wet behind the ears, the most junior person there and, honestly, I was lazy as fuck. I hadn’t located my inner-drive, I was yet to stand on the cusp of my own total economic meltdown that was still five years from happening. Yet still I was energised and invigorated by the sheer brainpower of the place. The mag read like a book, a GOOD book, the features team thoughtfully crafted fun original ideas keen to inform and to make you laugh – I was tasked with researching how to set up a farmyard in your garden, or told to road test a load of deodorants to see which ones made me less sweaty or more appealing to girls. Each mammoth issue came out at the thickness of your mum’s Next Directory and would feature roughly two semi-naked famous people, and the chances of eyeing a nipple were absolutely zero. I even managed to have a great time despite the editor – a martial artist no less – growing to despise me for my obvious lack of drive. He has since regaled people through the grapevine with tales of taking me into an office and confidently giving me the boot, which is odd as I don’t remember that happening. But if it tents his trousers to say so I’ll allow him to keep it going. I don’t give a shit, I’d have probably sacked me back then too if I’d had the stones.

The second time I went there – this time to work on the website – the tide had already turned for me (in a good way) and for the magazine (in a bad way). I had faced my pit of financial ruin and emerged on the other side with heavy eyes but also a moderate work ethic that would have shocked anyone from those early days. Sadly the magazine was clearly at the mercy of a perilous downward trajectory. To paint the picture, by now it was around 2005, everyone did their clothes shopping at H&M, and the website was doing blistering business on account of everyone cottoning on to THE INTERNET and all its bleepy noises and pictures of people and useful information about how to do things. Unfortunately some short time previously someone somewhere near the top of the magazine ladder had done a bit of a naughty by putting a porno actress on the cover. The shark jumped, the carpet bombed, the cat thrown out of the window, the waters muddied, the glass poisoned, the vase smashed, the bed shat, and with integrity bruised, the prize spot of the front cover seemed to have become a vicious bun fight to the death between Hollyoaks girls and a handful of Page 3 models rather than Hollywood’s finest. In an ideal world a wise charismatic man OR WOMAN would have now been allowed to redress the steaminess balance to prevent it becoming a nipple factory, but (as I once alluded to in another piece) by now magazines had become swamped by people with suits crunching numbers, fingering each other at parties, and – most disturbingly – allowing horny members of the public to dictate their content to them in focus groups. If the road to riches meant co-navigating the road to ruin, fuck it, keep on going. God I’m good at imagery. You can probably see why I’ve been so successful at this. I left for a stint on The Sun’s website.

Then came 2011. By now I was hard at it on the roll ups, I protruded at the middle, I wore jackets that old men would wear. It was also the third time I worked at FHM and it was a sobering experience. Gone was the majestic office with the pool table, the loud stereo equipment and the gargantuan workspaces, now it existed in one corner of a cramped sweat shop full of other magazines. I’d love to say it was soundtracked by whimpering, but it wasn’t, it was still quite jolly. A fitting analogy would probably be something about how the porn industry changed when it went from cinema to video like in the movie Boogie Nights starring Mark Wahlberg, but then I’ve used the word “porn” to describe lads’ mags when the two things should be mutually exclusive, THEY’RE NOT THE SAME THING. A few recognisable faces still lurked behind computer monitors, definitely a bit older, possibly wiser, and in one case particularly bitter towards me for some reason. Haemorrhaging readers and supposedly on its last legs, I was expecting to find myself amidst utter chaos like I’d just choppered into ‘nam, but yet again I found a magazine full of great writers with brilliant ideas all champing at the bit to produce something amazing and relevant, but now well and truly hamstrung by the demands of a few well-tailored ninnies – themselves relentlessly bowing down to the imaginary demographic that just wanted to have a wank and be told how to correctly grill a steak for the umpteenth time. It would be very arch for me to say that it had almost become a parody of itself, so I’m not going to (but it had). Somewhere along the line it had lost its real sense of identity, the world had kept on spinning while FHM hadn’t managed – or more realistically hadn’t been allowed – to keep up. The only concrete fact anyone seemed able to hold onto was that pictures of hot girls equalled magazine sales, sod the rest, which is a shame because large groups of potential readers surely still exist, are still inquisitive, and still keen for something decent to get stuck into that relates to them. Unfortunately they’re also the kind of people who don’t want to buy something with a large pair of hooters on the cover.

As for me I had taken the best part of fifteen years to morph into a strange bearded man firmly in his mid-30s with no grasp of anything remotely popular, so the minute a hip new editor emerged looking like a Top Shop mannequin and talking endlessly about tattoos I knew my time on the meter had finally run out. I widened my eyes and silently backed out of the door as if nothing had happened, a bit like the guy in Quantum Leap but without having made the remotest difference to the future of anyone’s lives.

Anyway, just for the halibut here are three big changes I’d make if I were in charge of men’s magazines today:

But, you know, what do I know?