There I am, spinning the wheels of steel…. 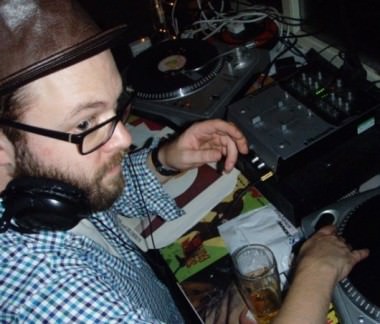 And so to the final 25 of the Top 100. You’ve hopefully enjoyed PART ONE, you liked PART TWO, PART THREE probably blew your mind. And now to the rest of the jolly little lot…

Nothing babyish about this guy, the cat’s huge. And the cat can FUNK baby!

77. Chocolate Milk, How About Love

If you’ve had a row with your lady and you want to put things right just fry yourself a bunch of vegetable spring rolls, plonk this gem on your tape recorder and boomtown! Welcome back to sex city.

A statuesque woman boasting a Cool Factor of at least 9 possibly even 10 this is my favourite Grace Jones song. I also like Pull Up To My Bumper but have no idea what it’s about.

Another classic go-to record for DJs at risk of losing the crowd – this one always gets them going. For the most part.

The most recent song on the list but one sung by an old soul. Last year I listened to this literally every single day for MONTHS.

I ummed and ahhhed for ages over which Chaka Khan track to go for but in the end I plumped for the one used for the sweaty street dance montage from the movie Breakdance.

I adore this track for so many reasons, but mainly because it features so many different synthesizer effects that it’s almost ridiculous.

Lots of soul music stems from the church and this uplifting gospel number would have me dancing in the aisles every Sunday if I wasn’t too busy sleeping off another heavy one.

Truly Donald Byrd was my first love to the point where I once tried to argue that he was more influential than James Brown. That’s debatable, but this track isn’t. He’s a hands-down marvel. RIP.

One of the great vocal groups this is their most epic and rewarding song, in my humble opinion anyway. I’m also a big fan of Message In Our Music which almost snuck in.

One of my happiest hours or so were spent watching Gil Scott Heron slurring out a few numbers not quite compos mentis but still a total genius about fifteen years ago in Finsbury Park. This is my favourite tune from my favourite album by him.

It was another horrible decision and I saw some gems fall by the wayside but this will always be my top Stevie moment from his best album Music of My Mind.

I LOVE JEAN CARNE. And this ode to not getting ahead of yourself when you find out a girl fancies you marks a fine time for soul music.

One of my number one funk tracks I don’t think I ever made it through a DJ set without playing this. Or ‘dropping’ it if you want to get all hippity-cool about it.

The greatest soul singer of all time.

This features on my favourite ever soul compilation The Smoocher from Big Cheese Records. A fine fine tune, all about wanting to make it in the city of angels.

92. Minnie Riperton, Inside My Love

No list was ever going to be compiled minus Riperton, it was just a question of which track to go for. Les Fleurs came very close but this nicked it for being spectacularly sexy. Trousers will tent.

93. Breakwater, Say You Love Me Girl

The soundtrack of my late teens in terms of funkability, message, and the fact that I just listened to it A LOT back then.

One of the true jazz-funk masterpieces, find the person you love most and play this to them immediately.

Should I ever die this is the track that I want played at my funeral – it’s about man’s struggle and while it bears absolutely no resemblance to my privileged life I just bloody love it.

The song Michael Jackson should have made, an absolute corker from another child soul star of the 1970s.

Anyone who owns the brilliant RARE compilations from the late 80s and early 90s should be familiar with this – a wicked two-step soul track, perfect for any dancefloor.

I’m a huge Maze fan and this for me is their finest eight or nine minutes of escalating soul-funk.

Very rare, very bare, very sassy. This is soulful seduction from the start, and isn’t to be played outside the confines of the bedroom.

Right, now tell me what I missed.