7 Thing that are better than SEX! (according to Simeon) 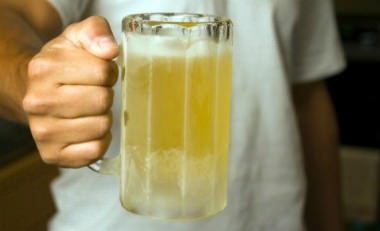 Sceptical? That’s understandable. But unless you’re a serial sex offender you should be able to think of at least a couple of things that are better than a bunk-up. Hell, I’m no monk, and I identified 7 while I was hosing down the dog (not a euphemism). Take a look at my selection and then get up all in my ass* below if you disagree.

*Not literally. Thanks anyway.

A cold beer on a hot day
Oh yeah, NOW you’re nodding. Allow me to set the scene: you’re on holiday and it’s roasting by the pool (like that bit of the start of Sexy Beast). It gets to lunchtime and so you fling on a t-shirt and head to the nearest taverna. Lovely.

You’re thinking: ‘actually, I got too hot back there, so I might just kick off with a Fanta for now’, but then you think: ‘Fuck it, no, I’m on holiday. I’ll have a beer’. Exactly three minutes later, you’ve sunk a good half pint of delicious cold booze from a frosty mug and you’re in pretty much heaven and seriously considering local house prices.

Dancing to your favourite song
You’ve been really getting into a song recently: playing it over; learning the words a bit; singing along. That’s all good in itself. And then you end up going out clubbing with your mates and the music is all loud and you end up dancing like a drunken eejit and then: BOOOM. DJ drops your tune.

“Hey guys! This is that song I was telling you about,” you scream. And you show them exactly how good it is by dancing to it very strongly indeed, while nodding and widening your eyes. Unbeatable.

An espresso and a cigarette
Yeah, this is pretty much up there with ‘stamping on squirrels to get an erection’ in the ranking of British acceptance, but it has its place. It makes absolutely no sense if you’ve never smoked, but if you have: you’ll know. Add a cheeky glass of brandy on the side and you are a made man. With heart problems, possibly.

When we host a tournament and it goes well
Remember Euro 96? That long, hot summer with Chris Evans on the Radio 1 Breakfast Show, Oasis in the charts and footba… What?! You were only 5 then? Give me a break.

Roast potatoes
OK, OK, maybe they’re not quite as good as sex, but they’re better easily as good as a wank, right guys? Guys?

Agreed, we’ll let this one slide.

The water rides in Walt Disney World
OK, this is a pretty specific and exclusive entry, but you’ll just have to trust me on this. I would happily swap my left testicle to be able to drift around one of Disney’s pristine lazy rivers in a rubber ring in the sunshine.

Thinking about it, I take that back. I could actually do the water rides again quite easily just by paying a travel agent some money. So forget about the bollock.

When your team wins something big
That moment of sheer ecstasy when your beloved sporting heroes pull something special out of the bag on any match day is made almost-infinitely sweeter when there’s a big title at stake.

And a man can lose all reason in that scenario. If Sir Alex Ferguson had run onto the pitch following United’s 1999 Champion’s League Final win in Barcelona and yelled: ‘Everyone, let’s go and burn down Gaudi’s cathedral – who’s with me?!’ at least 20,000 delirious devotees would have pitched-up with petrol. And what a magical sight that would have been. Glorious.

One Response to 7 Thing that are better than SEX! (according to Simeon)