Hey dudes, I once went to a festival and learned 7 IMPORTANT LESSONS

Look at all those tents! 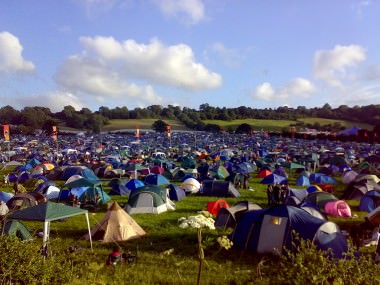 When I was a lad in the 1990s if you wanted to go to Glastonbury all you needed was a Swiss Army Knife, a Swiss Roll, a bit of hash in your back pocket and the ability to climb through a fence, or under a fence, or over a fence, or to barge down a fence, or to walk over an area where a fence used to be, or to suddenly sneeze and teleport from one side of a fence to the other side of a fence, or to dress up as a fence and slowly make your way in by moving a few centimetres an hour over a course of a few days. But that was your only obstacle. A fence. If your fence skills were bad you wouldn’t get in, but if you had middling to good fence skills, you could easily bag an entire weekend of dancing wildly to The Blue Aeroplanes and howling incoherently in the dance tent.

Great times, and I base literally all of this knowledge on tales from other people, because every year during Glastonbury I have been doing other things like watching Wimbledon on television with my mum, or being somewhere else in the country shopping for shoes or food or puncture repair kits. There have been times when I’ve been out having dinner with friends or drinking a glass of water on my own, I’ve been asleep in bed, I’ve been with someone else in bed. I have always slept indoors, because I use the period of a few days when Glastonbury takes place to get on with my normal everyday life. You might argue that I’ve never actually been to Glastonbury and you’d be right. I have never been to Glastonbury.

Even as I’ve aged and my face has become far more suited to Glastonbury on account of having a beard on it and some characterful crooked teeth inside my skull, I have still never gone. Not even once. The reasons for this are multifold. It looks like a massive shopping centre in a field. It’s shown on television which means I can not go but still pretend I went. I have a condition which means I’m not allowed to ever see city boys in jesters hats.

But before you say “hey Josh don’t judge it you’ve just got to get into the spirit go along and have a great time, it’s about joining in and sharing the love” Before you say that, bear this in mind: I’ve been to a festival. I’ve festivalled big time. About seven years ago I went to the Big Chill before festivals were even that popular so it was just hundreds of thousands, possibly millions, of trustafarians in the grounds of a stately home playing didgeridoos, skinning up spliffs and dancing tops off to tribal beats. I was right in the middle of it clutching a can of Red Stripe doing some interpretive dance of my own, most of which involved hopping on one leg for a couple of seconds then coughing and self consciously checking my phone. I realised that weekend that I can’t confidently dance in daylight. But that’s not all I learned. These are some other lessons I took from my festival weekend in 2006 that completely changed my life…

1. You don’t need all of a tent to make a tent. I’m not the best tent builder in the world. The fact that I even refer to it as ‘building’ might give you an idea of how dreadful I am at this. But as I stood there holding a big pole and watching my buddies erect my tent and my penis it was only when they’d finished that I realised I was still holding the big important-looking pole. It just goes to show, sometimes you can improvise a tent.

2. You should buy drinks in bulk. It dawned on me somewhere around the middle of Day One that if you doubled your drinks order at the bar each time you’d spend around 50 per cent less time queuing and therefore around 28 to 29 per cent more time practicing tai chi in front of people or beading an area of your hair or inhaling a balloon then laughing for ten minutes before throwing up. We even made up a song called “one for the hand and one for the pocket (hey don’t you knock it!)” sung in the style of the Macarena. That’s how cool me and my friends are. Try not to fall in love with us.

3. Some guys think it’s okay to twirl lanterns on rope.

4. If you walk far enough you’ll find a toilet that doesn’t make you vomit. My proudest moment in life came when I lurched from one portaloo to another dry puking and gasping for air until I found one that was suitable for me to have a nice relaxing diarrhea in. It took about three hours and led me right to the very outskirts of the festival to just behind the Bruno Brooks tent where Johnny Hates Jazz were doing a Q&A. When I returned to my friends they were all dancing euphorically like a weight had been lifted. “Whassap dudes” I said offering everyone a fist bump, my bowels completely empty for another twenty minutes.

5. If you don’t shower for long enough your body doesn’t start somehow cleaning itself naturally. After seeing the utter chaos these hippies were creating in the bogs I decided to swerve the showers, figuring that it’d just be a sea of unmentionable fluids and long confident cocks dangling from enormous woolly pubic regions while mine nervously retreated into my kidneys leaving me looking like a guy with a beard and a vagina. “It’s okay” I thought “my body will respond by self-cleaning like people with really greasy hair tell you your hair does if you don’t wash it for ages.” Turns out, like them, I was lying to myself.

6. Never take a guitar to a festival. This is just an observation I picked up using my eyes and my powers of deduction and I think it boils down to making a distinction between what your brain is telling you and what reality is showing to other people. So if you’re one of those guys sitting cross legged strumming a few chords, doing an acoustic lament with your top off, just know this – some people are waging an inner battle not to snort laughter through their nose.

7. People do not communicate this way in real life. When you’re drunk or on drugs in a field something weird happens – people forget that just two days earlier they were at work talking about brand values or crying in the toilet or using words like “escalate” and “cascade” in the wrong context. But now look at them, they’re hugging strangers, they’re closing their eyes and dancing without a bra on. What the hell’s going on here?

And that’s my story about a festival. Any more for any more?