7 THINGS I learned from my WEDDING DAY

We’re in the middle of that mess somewhere 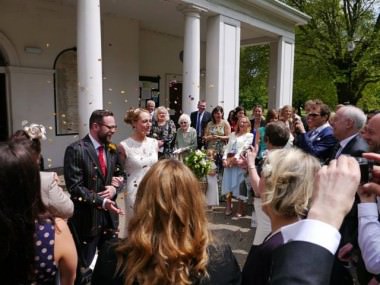 It’s been a few weeks since I posted anything here for the very simple reason that first I was getting married to a woman and then I was off on honeymoon to California with her for day upon day of tantric intercourse while waves crashed into rocks, relentless Barry White music, and big portions of everything to eat. So I’ve been pretty busy. But now I’m back, I’m half a stone heavier, my skin’s gone a weird red colour, my beard has decided to go blonde, and I thought it might be nice to share the lessons I learned about wedding days from a male perspective. Here you are…

1. You don’t think you’ll be okay and it’s fucking annoying when everyone tells you you’ll be fine BECAUSE YOU KNOW YOU WON’T BE… and then you are

In the months leading up to the exchanging of vows, rings, tufts of hair and fist bumps I kept picturing my wedding day in my mind’s eye. Not in a fantastical way like when little girls do it and they imagine themselves as princesses floating around on unicorns and having their hair brushed, but more in a blind panic kind of way like a guy who has a history of being very uncomfortable in formal settings. I imagined myself sweating and shaking uncontrollably at the front of a church while everyone pointed at me and stage whispered things like “look at that guy, he’s a fucking MESS!” or “what’s Gareth Gates from the year 2000 doing here?”, the vicar would eventually snort laughter through his nose, my woman would say “why?” and start crying, my various deceased great and less great grandparents would appear in apparition slowly shaking their heads disapprovingly. I was a bit nervous, I googled things like “really scared about wedding day” and “chances of groom vomiting or passing out or forgetting how to speak” and realised that there isn’t much on the internet to suggest that other guys even get worried about this stuff, which either makes me a strange anomaly (which I’m not) or means that no one likes to admit that it’s all pretty nerve-jangling. Fact is the lead up is terrifying, on the actual day almost everyone you know asks you how nervous you are which suggests that you should be VERY SCARED… and then your woman appears looking like the Archangel Gabriel but much hotter and a girl and it all just happens and somehow you’re fine. I didn’t even wet my pants.

So they say that to start with your legs will be jellylike, your mind will forever be on the verge of doing wild backstroke, then the day will flash by like a whirlwind or a slide machine that’s gone berserk. Or, in my case, the day will go at exact speed with each hour comprising sixty minutes and within each of those minutes sixty whole seconds which you can measure by going “one Mississippi, two Mississippi, three Mississippi, four Mississippi etc etc etc…” It’s only when you continuously recreate the entire day in your mind for the next few weeks that things start to get a little bit garbled.

3. You can get drunk despite all the excitement

Quite a few people told me that I’d be so buzzing on adrenaline all day that it would be near impossible for me to get drunk. I took them at their word and spent most of the evening with a funnel attached to my face barking at guests to pour another pint of ice cold 4 per cent lager down it because it didn’t matter I COULDN’T GET DRUNK. The result was that I became unthinkably drunk and decided to show everyone how good I am at dancing. Luckily I’m absolutely excellent at it.

4. You don’t suddenly become a master of public speaking after the first laugh

“The first laugh will relax you and then you’ll be fine” – that’s an impression of someone giving me sage advice. Only it’s not true. I’d only had one go at doing public speaking before this one and that had gone really badly (on account of me not having written a speech – long, but true story) so my track record was already dreadful. Here I managed to write one and actually deliver it – I think it might even have gone pretty well – but at no point did I suddenly feel relaxed. Instead I had five or six minutes of my mind going “ARRRGGGGHHH WHAT ARE YOU DOING!! PEOPLE ARE STARING AT YOU!” while my eyes and mouth recited studiously from a bit of paper that was tremoring in my hand. It was like my own personal Vietnam. If Vietnam had been a mediocre public speaking competition held in Vietnam. With Vietnam just being another word for London.

5. There is no right way to do a first dance

That Wedding Dance is a hot potato. There are fine lines to navigate, unspoken rules to follow, things to balance because it’s a balancing act. If you go all out, plan a routine and both prove to be extremely competent dancers the problem is you look like a couple of dicks, if you think sod it and just start getting off with each other you’re going to alienate the older guests (and absolutely everyone else). So I went for option 3, which involves shifting awkwardly from one foot to the other while occasionally mouthing SORRY at my new wife.

6. People, for the most part, are lovely

7. It might actually be the best day of your life (depending on the other days you’ve had in your life)

It’s a cliche, but it’s also true in my case. It’s not often we get our days in the sunshine but when we do it’s important to acknowledge them. This was definitely one of those days. If I could change one thing it would be that we’d have eaten half an hour earlier and I’d have a different bride. JOKE! JOKE! I’M KIDDING. FUCK!

3 Responses to 7 THINGS I learned from my WEDDING DAY