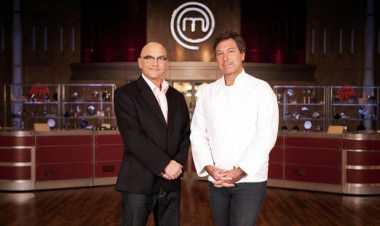 MasterChef has been back for a while but I’ve resisted writing about it until now on account of there being three episodes a week and a conveyor belt of cooks that has been chugging along at such a pace it’d be impossible to keep up with who everyone is. But now it’s semi final time and we’re left with just four contestants – Welsh guy, Indian woman, Superstar DJ who may or may not be known on the social scene as Spliffo, and some Oriental dude. They’ve all got one thing in common – they can cook the fuck out of shit.

It’s been a great series so far. Gregg’s lost a load of weight and now looks like half a Gregg. Torode has started doing a bit where he cooks everyone dinner then gets them to cook him five dinners in return. That’s how big businesses start. And there have been some shocking early casualties. A really posh guy who likes throwing dinner pardies for his cool mates looked like a contender at one point. There was a student from Edinburgh who moonlights as a goddess in the kitchen who got the hoof for undercooking either a seagull or a pigeon. That was an embarrassing shock for me on a personal level because I’d been telling everyone for weeks that she was definitely going to win. And when I say I was telling everyone for weeks, I mean the thought drifted in and out of my mind once. Another new segment finds past winners invited along to judge the new contestants every Friday evening over a gargantuan ten course supper, among them the lovely Shelina, the one with curly hair, old man, fatso, gappy tooth, and Tim who says things like “let’s get our sushi on” or “let’s get our steak on”. He’s so American.

Anyway enough of this summarising the show so far bullshit, let’s analyse the semi finalists, all of whom have names but I can’t remember any of them.

Welsh Guy – he means business, he’s got a game face, he has an A game. He brings the thunder, he’s real. If he didn’t like you he wouldn’t slag you off behind your back like a little bitch, he’d tell you to your face. That means you can trust him but you should also fear him. I was worried that he was taking it all a bit too seriously and would probably commit suicide if he didn’t win, but then he made burger and chips in one of the rounds and that was an absolutely hilarious thing to do. What a fucking nutter.

Indian Lady – This chick knows her way around a stove, and cooks a mean takeaway. So far she’s done chops in a green sand made of spices and chillies, she fried an onion and popped it in a white paper bag, and when the teams were forced to cook a huge feast for a load of guys who were either strippers or actual firemen she threw together a sponge and custard that you’d probably serve to Zeus. Everyone loves her, she’s more cheerful than a talking erection and if she doesn’t win this thing someone else definitely will. I want her to win it for her kids.

Spliffo – that Spliffo’s a bit intense isn’t she? When she first turned up on the show I literally yelled “NO CHANCE” and threw a brick out of the window, but then like a tennis ball you’re really trying hard to get rid of in a park while you’re walking the dog, she just keeps coming back. God I’m amazing at metaphors. Anyway, she’s now starting to show a bit of steeliness which is weird because she was all meek and timid at the start. I just don’t know where I stand with this maniac. As things are she’ll probably come fourth, which seems appropriate because she’s a DJ in real life so is probably having orgies all the time.

Oriental Dude – keep an eye on this guy, he’s got some mad skills. On his very first day he did raw fish with an egg that tented John and Gregg’s trousers, he then did curry with chips and rice which is absolutely fucking unthinkable but had literally everyone spaffing all over the place. Then the other day he made some kind of fish thing, or it could have been meat, and served it in a mist underneath a home made thunder cloud that tasted of Paradise. He’s basically a cookery genius and the one to beat. Although now I’ve said that he definitely won’t win. But now I’ve said THAT he probably will. But again, now I’ve said that he won’t… but now I’ve said he won’t he probably will… you might as well go now, I’m going to be doing this for ages…

One Response to Say HELLO to the MasterChef semi finalists!