Scared of losing your job? Don’t be scared, it can be GREAT! 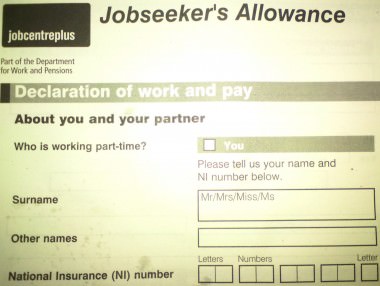 About five years ago I lost my job. I was working for a small company as a writer and editor, I was getting paid absolute peanuts on account of it being a new company with not much money, then one Monday evening at the end of the working day I was told that my time was up. I’d become too expensive they said, and apparently the bloody Credit Crunch hadn’t helped things. It sounded like total bullshit to me, but rather than put up any kind of fight that might result in them blurting out “look, you’re shit okay!” I thanked them as though I’d just been eliminated from the latter rounds of the X Factor, I shook their hands and emerged into a scary world numb but well aware that I was in my 30s and suddenly unemployed. Fucked basically. This wasn’t part of the plan. I’d already put over a decade of my life into journalism, I’d made some absolutely appalling decisions along the way but I’d stuck at it. Those bad decisions would require me to write an entire book to explain which would be very boring for everyone including me, but in summary I’d been far too lazy in my early-mid 20s because I didn’t care about what I was doing. It wasn’t important to me then like it is now, and whatever ladders were there for climbing I pretty much took to with a flame-thrower for one reason or another. Plus I’d resigned from at least three decent writing jobs far too soon because I was listening to my instincts and my instincts are all twats.

So there I was, it was definitely raining which felt appropriate, and I was standing a few streets away from my ex-office sheltered in a doorway smoking a cigarette. I was wondering who to call. I knew I should call someone, because otherwise I’d be forced to stand in that doorway for the rest of time with my inner voice intermittently yelling “shit… shit… SHIIIT… shit… SHIT… fuck… FUUUUCK… fuck….fuck … fuck!” in a bewildered rage while I chain smoked myself to death. I couldn’t think of anyone. Not my mum, she’d make me afraid about homelessness and starvation. I didn’t have a girlfriend because I was young and sexy and no one particularly wanted to go out with me. If I’d told anyone else in my family they’d start panicking around my mum and the world would burst into flames. Most of my friends would just laugh. I could try Samaritans but then I’d have to pretend I was thinking about killing myself, and rubbish though this was I still enjoyed the whole being alive thing I had happening. In the end I flipped a one billion sided coin and called my friend Olly who took me out, got me drunk on weak lager, and in a totally bizarre twist of fate, he introduced me to the girl I’m going to marry next month. But again, that’s another story.

Now at this point I could dive further down into the malaise, I could explain how unemployment makes you feel metaphorically castrated, as though the job was your balls and not having the job now means you’ve got no balls. Just a really big dick all on its own. I could go on endlessly about how there were no jobs anywhere for me, no one was looking (at least not for me), and I could barely land a commission having been in the employment wilderness for a good few years on account of working for just one company full time. I could whine about how every ounce of confidence you’ve built up evacuates your soul within a few weeks. But I’m not going to, mainly because none of that’s true – apart from the bits about finding new work. Being unemployed is definitely scary and it can’t go on forever because your spirit would probably whither and die. But I was on the dole for around six months five years ago and I can honestly say it was the greatest six months of my entire life. Here’s what the crippling agony of signing on taught me…

When I had money I spent money. My clothes were all new and probably made of gold, and the minute an old pair of trainers got a bit funky I’d simply throw them into the street and march into Footlocker shouting “MORE NIKES!” until someone gave me a new pair of Nikes. I was chucking money around like I were Joey Essex bouncing wheelie bins off shop windows. Whatever that means. My point being that suddenly having to ration my cash meant I couldn’t just spend spend spend, and weirdly I didn’t really notice. If anything I noticed how many nice things I already had that I’d probably been neglecting. Old shirts got another blast in the sunshine, records I’d not listened to for years became the soundtrack of my days. I couldn’t afford the cinema, so I’d buy a video for a quid from the charity shop down the road and have my own kind of premiere at home. Without wanting to sound like too much of a wanker there was a time when I wasn’t worried that I was missing out, I was worried that other people were.

From the day I was cruelly booted out of one office on account of the “Credit Crunch”, it took probably around ten months before I was called upon to get dressed and spend an entire day working in another office. That was a weird day, which I mainly spent stopping my internal monologue from becoming external like it probably would do if I was at home. It was ultimately nice and entirely necessary to get back in the groove, but even still those months in between offices were some of the most productive I can remember. I set up this very site. I thought fuck it, I want to write, I’m going to write. I didn’t need PERMISSION to do something I enjoy doing. So I set about assembling the finest website known to man, a multi-award winning rollercoaster ride, a money making machine, an “irrepressible canter through popular culture” as it was described in THE TIMES. I have of course since realised that it will never make me a penny, but that’s fine. I love this bloody thing with all my heart. It spawned a brilliant comedy night which featured lots of people who are now really amazing and famous, and it made me fall in love with writing all over again. I NEEDED that.

In the last few years I’ve been in the money again, so I’ve eaten in some lovely places – the kind of places where they rest your meat at an angle on some veg, in fact fuck it, just the kind of place where they REST your meat. And there’s a tear of sauce on the side of your plate. And a jus. And a puree. I’m also just up the road from Brixton Village, where people in tweed jackets are urged to eat organic treats at reasonable prices. It’s all been a wild ride man, but nothing will ever come close to lunch at the cafe across the road from the job centre every two weeks after signing on. A fortnightly treat that set me back a fiver, I will never have a more delicious meal.

4. The world doesn’t implode when you lose your job – you just feel like a cock for a bit

Probably the best lesson I learned during my time out of work is that you’ll be okay. When you’ve got a job it’s easy to think that without it the whole world would implode and you’d be left with nothing. But that’s not true. You survive. You find out how lovely people are, or not depending on how they react to you perpetually badgering them for money and cigarettes. But seriously (removes huge shoes) I realised that there are always ALWAYS ways of getting by, and since signing off the dole to a triumphant fanfare and an emotional hug from numerous council workers (which was not forthcoming) in 2009 I’ve appreciated every minute of my unemployment. It’s played a big part in re-landscaping my entire future, and I now take nothing for granted. That’s a pretty good lesson to learn and I got that FOR FREE. In a way.