Welcome new contributor Simeon who wants to talk about THIS 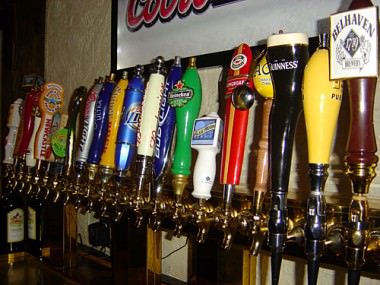 Reader, this was written on a Thursday lunchtime, at a time when many of our thoughts turn to the weekend – and specifically, to hitting the hooch hard. Really getting on it. Nailing pint after pint of fizzy brown booze and urinating in a fridge or two. And then losing control of your own colon. You know the drill, right guys? Guys?

Oh, to hell with it. These are the best beers.

Coors
I know what you’re thinking. Besides vaguely considering what you’re going to have for dinner, you’re also trying to work out where the hell you can buy draught Coors. Well, dinner I cannot help with; Coors, I can. This frosty brew is typically found in clubhouses and it makes sport all the better for it. Rugby? Bosh a pint at halftime and you’ll plough through the next scrum like a traction engine. Golf? A livener loosens the swing. Football – you get the idea. Dry as all hell, teeth-achingly cold and all kinds of delicious. Game on.

Fosters
You’re right: it is as weak as urine and as familiar as your own tuppence, but that’s the glory of Fosters. And it has its place, namely: morning drinking.

Let’s say you’re booked on a 10am flight and you get to the airport in time for breakfast. Tradition rightly dictates that you ‘get on it’ in the departure lounge, and there’s nothing more arousing than watching the sun come up while cradling a cold one. Are you going to opt for a skull-crushing Stella? No. You’re going to go for three pints of this golden throat charmer and you’re going to urinate in your own trousers at take-off. Bliss.

Staropramen
It’s hard to believe, but there was a time not so long ago when premium lagers didn’t really exist – it was all Carling and Carlsberg back then. Lunacy. Stella and Kronenburg came along, and then – oh and then – one of the big breweries introduced Staropramen. Imported from the Czech Republic, it’s a tasty brew that ticks a lot of boxes and stomps on your head like a stormtrooper. You’ll pay a fiver for a pint of it nowadays, but don’t get me started on that. Talking of which…

Peroni
The millionaire’s pint. Walk into any gastro pub or swanky pizza house and your eyes will doubtless alight on the welcoming red, white and blue of the Peroni Natro Azzurro font. You’ll weigh-up the other options, count the cash in your pocket with your fingers and – if you’re feeling flush – order with pride. And what a treat it is. Reassuringly stronger than the other premium ponces, this rewards your outlay with a guaranteed slightly wonky eye after two pints.

Fuller’s London Pride
To my mind, this is the only ale that deserves a place in the top ten. How’s THAT for controversy? Why? This is a bewitching brew that can lull you into a very false sense of security. Tastes light. Friendly, even. Next thing you know you’re eight pints down and ready to take your top off so that you can ‘dance better’. Maybe that’s just me. Nevertheless, solid work, London brewers.

Cruzcampo
Yes, you will struggle to find this on draught, but hold on to your kecks because it is being rolled out nationwide as I type. Literally, by the time you’ve read this piece, it will be in every pub in the land. But let’s not get bogged down on distribution issues, because this fizzy senorita is always an absolute delight. Head-throbbingly strong, and tastes like hammers. In a good way.

Heineken
I’m going to give it the old ‘not-so-long-ago’ line again now, but hell, this needs to be said: not so long ago, people would rather vomit into their own hair than order Heineken. The good folk at the brewery got to hear about all this and one brave executive in Holland stood up in a board meeting and said: “Fuck this lads, we’ve got to make it stronger, rebrand it to hell and back and make it tasty.” And do you know what? That brave executive went on to become the President of the United States of America.

Or perhaps he didn’t. Who knows? But he should have done, because drinking this 4.8% beauty is as satisfying as shaking the hand of Diego Maradona’s wife.

Kronenbourg 1664
I don’t like the taste of Kronenbourg. Few people do. But by the power of Greyskull, this has GOT to go on the list purely on its ability to completely ruin a man. Eight pints of this in one night? Can’t be done. Go ahead and try my friend, but I’ll see you in the MORGUE.

San Miguel
Ah. The spirit of holidays past, now lovingly-served in your local piss pit. Man, there is nothing better than the first beer of the day after you’ve baked yourself to a biscuit on a foreign holiday. If you’re in Spain (or the Philippines), this is your go-to brew, and if you’re doing it right, you’ll chase it down in two glorious chugs from a frosted glass. Wallop.

Stella Artois
OK, so it’s not fashionable, there are better-tasting beers and it can give you the most brutal of hangovers, but for sheer consistency, Stella has got to be number one. I like to play it safe when I’m drinking, and I know that if I’ve got to be somewhere – and by ‘somewhere’ I mean: off my nut – Stella is a trusted friend.

Cold. Bitter. Dry. Delicious. An intoxicating Mata Hari who will lead you by the hand to the nearest boudoir and… actually, I have no idea where I’m going with this. Let’s just leave it there and agree that Stella is the best, OK?

Simeon de la Torre is a writer who should have been doing something more productive when he was pissing away his time on this nonsense. Still. Shits and giggles, eh? www.simdlt.com