The 10 Greatest Cakes of ALL TIME

Including this cheerful treat 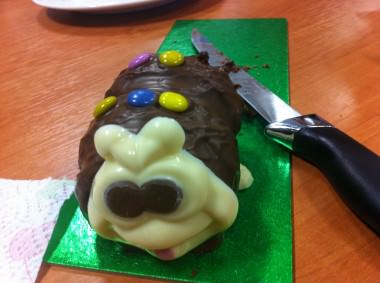 In a supply and demand sense food has always been and always will be fashionable. People have to eat. But last year saw certain foods elevated to superstar status. Thanks to all sorts of angular tweed bastards it became the very height of fashion to enjoy working class American staples like barbecued pork or cheeseburgers. And then on the back of The Great British Bake Off, suddenly people are spaffing all over cakes, in a manner of speaking. Anyway, the good news is that, with the exception of the ones at weddings and the stuff at Christmas, I fucking love cakes. Always have. So much so that I’ve got enough experience to list my ten favourites, and here they are…

Plain Sponge
That’s right, my favourite cake in the whole world is a sponge cake, made from basic ingredients like flour, sugar, eggs and whatever else it is that goes into a cake. Perhaps a pinch of salt? I don’t know, I’m not a professional chef. You might be tempted to saw this one in half and lavish it with great big smears of cream and jam, but for fuck’s sake don’t. Just keep it plain, simple, and as moist as a clump of dewy moss on a hill somewhere at sunrise and you’ll feel like you’re dining with Zeus. An underrated gem.

M&S Chocolate Caterpillar Cake
Hands up who doesn’t like an M&S Caterpillar. Statistics would suggest that literally no one raised a hand just then. If you did, please leave, you’re not welcome around these parts. What kind of psycho are you? Anyway, this has got the lot – chocolate, cakey bits, the detailed face of a smiling caterpillar. Not one person has ever tried this for the first time and not wept with joy. The ideal birthday cake for people at work in an office.

Jamaican Ginger Cake
The general rule with cakes is that if they come in a wrapper you might as well chuck them straight out of the window. But there is an exception, and right now you’re reading about it. These spicy treats come compact in a basic long loaf formation, and there are absolutely no frills. It’s just a big deep brown sticky brick. Served with warm custard and a Bob Marley soundtrack, this is probably exactly what it feels like to live in actual Jamaica. Not to be consumed by bumperclarts.

Lemon Drizzle
Different cakes serve different purposes. Some help celebrate a birthday, some soothe a broken heart, some are specifically designed to absorb tears because you’re eating it at a funeral. This little bugger falls into none of those categories. The Lemon Drizzle isn’t an “occasion cake” – it’s just there, it’s a non-specific time of the day, and you fancy a hit. In an ideal world the texture will be as moist as a huntsman’s underpants, and the icing as sharp as a knife that’s literally just been sharpened by Rambo. Goes well with PG Tips.

Coffee and Walnut
It’s quite a thing when a popular drink can be reinterpreted into a cake, and then garnished with everyone’s least favourite nut and still be nice. Seriously, what is it with walnuts? They’re, erm… you thought WALLS were bad but… has anyone honestly ever… oh sod it! I was going to attempt observational humour, but it just wasn’t taking. The point is walnuts are rubbish, coffee in a cake shouldn’t work, and yet there it is, TOTALLY WORKING. I’d eat the shit out of one of these on any given day. The perfect elevensies.

Swiss Roll
The hilarious thing about the Swiss Roll is that it wasn’t even invented in Switzerland! No, the word on the street is that it was first tailored in Hong Kong, but as the Hong Kong Roll was probably already a world famous kung fu move, someone stuck a pin in a map and decided to name it after the bravest men in Europe instead. The set up is simple: do a sponge thing, get Jamie Oliver to smoodge on some jam, roll it all up like an old newspaper, then slaver it in warm custard. If you ever want to see a group of school kids punching the air in unison just shout “Swiss Roll and Custard” through a megaphone at them.

Banana Bread
In a spectacular show of humility this cake deems to call itself a “bread”, but don’t be fooled – this guy’s definitely a cake. What really marks this one out and allows it a strong place in my top ten is that it performs a kind of alchemy. I hate bananas, see. And yet, put them in this here cake, and suddenly I’m wolfing them down like something a person would wolf down in a metaphor about the enjoyment of food. It’s the perfect cake for people who have some kind of irrational problem with fresh fruit.

DIME BAR Cheesecake
Some would argue that a cheesecake isn’t strictly a cake, at which point I would get nervous, confused, and go completely silent. I don’t make the rules, guys. All I know is that it’s got cake in the title, so I’m including one. Cheesecakes are generally good – the New York one, the frozen ones with strawberries etc… – but the king of all of them comes from an ancient recipe I stole from a craggy-faced washer woman in a newsagents. It involves cream cheese, castor sugar, vanilla pods, then small glassy shards of pure Dime Bar. Pop that shit in the fridge overnight, then tuck in first thing in the morning. For some reason this tastes even more amazing when your mind’s doing backstroke on account of a few weak lagers.

Black Forest Gateau
Anyone who was lovingly raised in the 1980s will have enjoyed each and every meal bookended by a pair of exotic delights. On the one end a handful of prawns smeared in ketchup and mayonnaise and served in a substitute ashtray. On the other, this, the yummy treat from the southern end of Germany. It had everything you’d normally associate with a German breakfast – chocolate, cream, some cherries, a kind of sponge thing happening, thin shavings of tasty milk choccy – but in A GATEAU. Just the very act of thinking about these half-perms my hair and completely stone-washes my underpants.

Carrot Cake
Carrot? In a cake? Is someone having a fucking bubble? Not so, imaginary Cockney person! As it happens, even the most hilarious penis-looking orange vegetables can be transformed into morsels fit for the Women’s Institute. Those gorgeous old dears love a sliver of carrot cake. Absolutely love it.

6 Responses to The 10 Greatest Cakes of ALL TIME