It’s the MasterChef: The Professionals FINALISTS!

Who will win? Other people decide 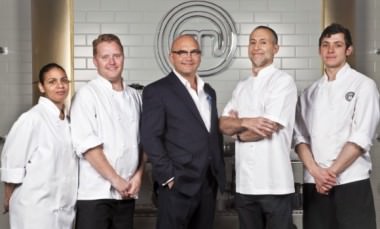 It’s been another great year for MasterChef: The Professionals. It’s basically the best version of the franchise, with Michel Roux Junior and his arch sidekick Monica drafted in to lend the show a bit of finesse – and it works. He’s definitely the nicest and the thinnest chef in the world, she has the power to make professional cooks so nervous that they completely forget what asparagus spears look like and start scrambling eggs for absolutely no reason. It’s genius, and this series has been dynamite.

Before I get to the three finalists, here’s a very brief lowdown on what’s gone before: there have been two contestants showcasing exactly the same “squelchy S” speech impediment as Louis Spence from Pineapple Studios – this is probably some kind of record. So, you know, a bit of television history there. One looked like a village idiot, the other was Scottish, both were good but not good enough. A forager called James painted elaborate pictures in your mind of him bounding around woodland areas with no clothes on clutching a spade and a frying pan looking for rare mushrooms. Gregg and Michel eventually tired of his outdoorsiness when he went one plate of muddy carrots too far.  Marcus Wareing would be a nightmare to work for, he’s horrible, whereas Tom Kerridge is absolutely lovely. And really enormous. Gregg’s eaten a world of tasty pud, Michel Roux Junior has occasionally slipped into French, everyone’s had a really fucking good fucking time. And now it’s time to meet the three fuckers remaining. I shall stop swearing inappropriately now (for a bit).

Anton
Anton is the one to beat. He’s like a great big flame-haired David Brent with sublime cookery skills. And he’s dedicated, so dedicated that he was one week into his honeymoon when he decided to stick a pin in that lazing around and slowly shagging one another bullshit and got back into the kitchen. His highlights include a fish wrapped in toast, an egg in a green smoking jacket made of herbs, and some really tasty pork served with all the bits you’d usually throw out of the window like the heart, the liver, the clitoris, and the kidneys. When he cooked lamb for some Michelin starred chefs, they liked it so much they all licked their plates clean. That’s just a fact.

Oli
To achieve the right balance in these shows, you need a young genius, a child star. Otherwise you’d just have three podgy beer monsters sweating over a stove looking like your uncle giving five-a-side a go. So enter Oli – he’s young, he’s fresh, he looks identical to every single Creature Comforts character you’ve ever seen, and a hunch suggests that Monica and Michel Roux Junior loved him from the start. Whatever IT is, he appears to have it. He’s been consistent, and also very considerate to his meats, in that he likes to gently bathe them in a warm bath before he roasts the fuck out of them. As things stand, he probably won’t win, but probably will get a job working for Michel Roux Junior or as an extra in the next Wallace and Gromit adventure laugh-a-thon.

Keri
Keri’s a real grower. When she first appeared on the show, she seemed constantly stressed out, and the most likely contestant to almost split a sauce and react by smashing a plate into a wall and stomping off. But no, she’s become increasingly Zen, and could now be peaking at exactly the right time. Her strongest dishes have been puddings, which is always a surefire way of tenting the famous Wallace trousers, but she’s done some pretty nifty mains too – including a really delicious fish thing where they all curled up like synchronised swimmers and were served in a potent ravine of sauce. She’s a strong, beautiful, independent woman – who avoids crying by fanning her eyes a lot with her hands.

This is going to be VERY exciting.