MY 9 Greatest Ever Cinema Experiences (and 3 Worst)

Including the experience that started it all 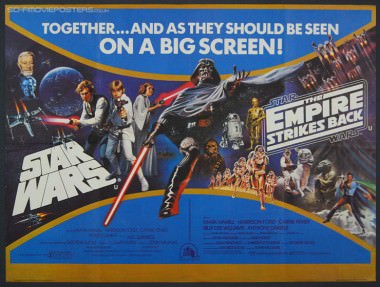 Say what you like about the cinema, but some amazing shit goes down in that place. When I was a kid you could smoke in there, there were choc ice breaks. It was literally a day out. Anyway, I’ll shut up now and just list some of my favourite ever moments sitting in a really comfortable chair eating handfuls of sweet and salted popsie… feel free to add your own in the comments section.

1. Star Wars/2. Empire Strikes Back Double Bill (1982)
Picture the year: it was 1982, I was a six-year-old boy. Being the early-1980s, all girls looked like either Clare Balding or Ziggy Stardust, all men over 40 were mirror images of Arthur Scargill. For breakfast you’d have a Marathon and a Tizer, lunch would be a starter of orange juice followed by a burger minus a bun. It was an amazing time for civilisation. I probably wore colourful make-up and kilts and played synths in an electro-pop group. I don’t know. I was fucking six. Anyway, what I do know is that one afternoon in 1982, my mum guided me by hand to this massive building that looked like a glitzy warehouse, and inside was the most amazing thing I’d ever seen. It was a television screen the size of a swimming pool, and on it was some film called Star Wars followed by an even better film called The Empire Strikes Back. I was having girlfriend issues, my teeth were just falling out for no reason, I had a big fuck off rash on my face, but all of these worries vanished like something you’d use in a metaphor about vanishing, as I sat transfixed by Han the Man, Chewy The Walking Carpet, Darth,  beautiful Leia, Old Man Kinobes, the gay robots, and some precocious farmcock called Skywalker. “Mummy that was AMAZING!” I probably screeched as we walked back to the car. “For you it was,” she replied, doing a perfect Yoda impression.

3. Point Break – 4. True Romance – 5. Pulp Fiction (1993/1994)
Those 1990s were a lark. You had your dope smokers, your ravers eating their own faces, grown men saying things like “our kid” or pronouncing simple words like shine “sheeeiiiine”. I was more a light game of pool and some Acid Jazz kind of guy. Your basic dick. I wore cords and had attempted sideburns. Anyway, I can’t remember the exact sequence these took, nor the accurate period of time between each outing, but at one point I visited the pictures three times, and the movies showing were the surf epic Point Break, followed by two of Tarantino’s first and finest – True Romance and Pulp Fiction. Each one danced on my eyeballs like they were Bruno Tonioli and my eyeballs were a shiny dancefloor. I was delighted, mesmerized, aroused, drunk on movies, other ridiculous descriptive words put together to describe how I felt. This sequence of cinema-going decisions was like the greatest hat-trick of all time, including the one Robbie Fowler did in about four seconds against Arsenal.

6. Billy Elliot (2000)
Since having wild air guitar played all over my heartstrings by ET in the early 1980s, I hadn’t wept uncontrollably in a cinema. And then along came that adorable little shit Billy Elliot with his gruff Northernness and his graceful footwork – midway through my eyes developed an emotional sweat like you wouldn’t believe, by the end I was basically howling. Even now when I think of the little ballerina explaining to his perplexed dad that dancing makes him feel alive inside, my lip starts wobbling.

7. Brokeback Mountain (2005)
Being a rampant heterosexual male who likes things like juicy tits and big erect clitorises I didn’t think I’d like this movie about two handsome cowboys buggering each other silly in a tent, but on the contrary, I absolutely fucking loved it. I went along with a female friend of mine, and while I wrestled a determined lump in my throat during the bit where Heath Ledger tearfully sniffs his dead boyfriend’s lumberjack shirt, she was basically texting people and absent-mindedly playing Snake. What a waste.

8. Rain Man (1988)
On almost every level Rain Man is a dreadful film. Cruise is there, Dustin Hoffman’s Oscar-winning performance is borderline unwatchable – just a series of loud gulps and yelps. It’s absolutely all over the shop, just awful. So why is it on this list? Because it was the first of a handful of movies I watched for free. The trick was simple – one buys a ticket, five get let in through the fire escape near the bogs. Classic hijinks.

9. Back to the Future (1985)
Quite probably the best cinema film ever. Apart from the preceding eight that I’ve literally just explained in intricate detail. I still occasionally punch the air and sing the line “that’s the power of love!” to myself when no one’s looking.

The Godfather Part III (1990)
It was a toss up between watching this or Goodfellas. Fucking hell.

The Phantom Menace (1999)
This was like being cock punched by George Lucas himself.