MasterChef: The Professionals: An Early Episode: A Review 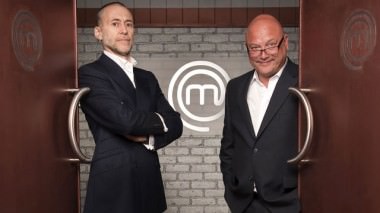 And lo, MasterChef is back in its “The Professionals” guise, which is by far the best of the three or four guises that it operates under. They’re not stupid pricks like the Junior MasterChef contestants, they’re not all “look at me I’m famous!” like on Celebrity MasterChef, and they’re considerably better at cooking than the civilians in standard MasterChef, with the possible exception of Shelina, who can do shit to a mango that would blow your mind. Those are just the facts. Some other facts include: Gregg has new glasses, Monica Galetti is back as the stern Ying to Michel Roux Jr’s free loving Yang, and there will be no John Torode. Will we miss his puppet face? Possibly a bit.

One thing was for sure, tonight was going to be intense. Probably too intense for most people. Thankfully I’d had one and a half cans of Fosters, and I was eying up another can after this one. Three cans would give me the strength to get through this. It was also a convenient number, as this outing would be split into three rounds:

Round One – The Skills Test.

Traditionally this is the round where Monica demands that someone boil an egg, and they end up shaking so heavily that they hurl the egg at the wall and start haphazardly clawing at random objects and letting out stress yelps. It’s a tense time for all involved. They deliberately turn the intense-o-meter up to around 17, knowing full well that 10 is the highest it should go. It’s dangerous, and tonight’s outing didn’t disappoint. Tasked with opening a sardine to resemble an angelic fish vagina, then to serve it with fried pastry potatoes and a side salad, some of these chefs were all over the shop. Andy stabbed randomly at the fish, then placed his own hand in a frying pan. A girl called Anna giggled a lot. Mark from Ireland made some dreadful schoolboy errors like not seasoning the fish and sweating too much, and a guy called Craig took to the thing with a flick knife and some scissors. It was only Karl – who says stuff like “luckily I’m amazing at everything” and “if one man can cook something brilliantly, I’m definitely that man” – who didn’t make a total pig’s ear of things. The Wallace trousers throbbed, Monica’s lips stiffened at the sides to form some kind of almost-smile. Karl, it’s safe to say, had danced a merry dance all over everyone’s taste buds. A move known on the day as a “reverse Andy”. Andy’s food had been revolting.

“Go home Andy!” barked everyone in unison, including me. So Andy left, taking his long neck, his t-shirts, and his youngness with him.

Round Two – The Classic Cookery bit, now featuring Michel Roux Jr by himself. No Gregg Wallace. Just what the hell was going on?

Today’s classic was going to be a traditional Frenchman’s lunch of boiled chicken with ox-face, mousse wrapped in mushrooms and a really yummy sauce. Roux Jr showed how it was done, sniffing his plate contentedly at the end to make you absolutely certain of one thing: that was a tasty dinner right there on that plate. Really really lovely. But how would the contestants cope? Would they wilt like something you might use in a metaphor about wilting? Or would they rise to the challenge like something you’d then go on to use in that follow-up metaphor about rising? Only time would tell. And thankfully time was something we had plenty of. The program was barely halfway through. It was high time to go for a quick wee.

When I returned having washed my hands vigorously and thoroughly to rid of any latent germs that may have been on my groin, there was a classic MasterChef montage going down. Intense car chase music, those chip-choppy machines whizzing and spluttering, knives thwacking down on surfaces to king fu sound effects. It was dizzying and invigorating. I liked it a lot. Then Mark from Ireland had an awkward conversation with Michel Roux Jr about how he’d never really cooked before. The kindly Frenchman did a fantastic job of not looking completely appalled by this. Fucking hell, Mark.

To cut a long story short, they all did okay, except for Mark, who made a meal that was basically a pile of shit. No doubt about it, if another person was going at the end of this episode, it rhymed with the word Dark and started with an “M”. Do you see what I’m trying to say here? Mark was Dead Man Walking. It was written on the wind. Ho hum, so the charade continued into Round Three. One would go after this. By which I mean Mark would go. Definitely.

Round Three: The cooking of their own stuff, this time featuring, drum roll… Gregg Wallace! And end drum roll.

“Don’t just impress me,” began Michel Roux Jr, “impress THIS GUY!” And in burst Gregg crazy eyed, beaming like a madman and shooting finger pistols all around the room. There he is, there’s our Gregg! “I want to taste your greatest dish!” boomed the man Wallace, as the intense-o-meter cranked up even further. Far enough for a tribal beats soundtrack to be justifiably incorporated.

What were these people going to make? It’s a good question, and to summarise: Mark was going to make a big plate of failure, Karl was doing some amazing fish thing, Anna was sticking to her roots as a maker of really nice puddings and doing lemon tart in a sugar prison, while Craig caused some minor tenting of the Wallace trousers with talk of steak and truffles. All the while the Roux Jr penis stayed soft and long. Focused.

After a time, which could have been anywhere between four and seven minutes, Gregg’s arms shot towards the sky. “STOP!” he yelled. “STOP COOKING! STOP IT… STOP NOW!” He slalomed the room checking that each oven was turned off and that no one was trying to squeeze in an extra few seconds of cookery on the sly. They then tried everything, all the dishes, and everything went exactly according the alignment of the stars. All were delicious except for Mark’s. Mark just couldn’t cut it.

“Get out Mark!” deadpanned Gregg, pointing and nodding towards the exit.

“YOU HEARD HIM, GET OUT!” Shrieked Monica Galetti appearing suddenly from behind a fridge, and sprinting towards the camera.

And everyone started laughing. Except for Mark. Mark sodded off.

Next time: People literally giving it 110 per cent.