A Fresher’s guide to being really cool at uni… 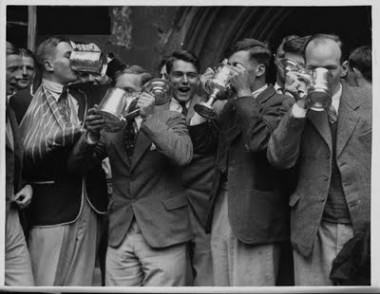 21 years ago when I went to university the world was a much different place. No one owned an internet, people still used pay phones to arrange drugs pick ups/weep about their loneliness to a family member, and a university education was completely free so it was a great excuse to horse around for three years guilt-free. Some days you might twist your hair into white man dreadlocks or go to the shops without any shoes on. No one cared, it was anything goes man, and everyone was too busy having a great time to notice your jester’s hat. Anyway, in the spirit of giving, and because I’m an expert at watching other people become popular, here are some sure-fire things you can do to ensure that absolutely everyone thinks you’re amazing during Fresher’s Week…

Lie about a pretend holiday you had in Amsterdam
All of your holidays so far have been to campsites where you might have choked on a beer or touched the outside of a boob in a bra, but it’s time to invent a brand new you. One who’s popular, sultry and intriguing. One who went to fictional Amsterdam coffee shops and got blitzed on high grade hash and then wrote amazing poetry like “how now brown… STREETLAMP… OIL DRUM… RAIN. DROPSSS!” on a napkin. Man, that’s some crazy poetry.

Buy some cheap vinyl records
You’re at university now, it’s time to throw all of your Rita Ora tapes out of the window, microwave your Little Mix singles, and embrace pretentious musical diversity. That means bongos in your bedroom, Legend by Bob Marley on loop, and perhaps a nice little stack of vinyl records. It doesn’t particularly matter what they are just so long as the other kids can rifle through them, occasionally stopping to examine a Sergio Mendes cover as if they know what they’re looking at. “Wow you found this Serge… Serginio Mendeeezess… Mendez… SER-GIO MENDEZ record? Pretty rare, dude… pretty um…rare” they’ll say hoping you don’t ask them a single follow up question about this Sergio Mendes chick.

Put a provocative poster on your wall
Don’t embarrass yourself by decorating your bedroom with busty warriors wielding giant swords, everyone will mistake you for a 14-year-old masturbator – not the slightly-moustached guy you’re fast becoming. Your bedroom wall is a window into the mind of this fascinating new you, and your peers need to look at the artwork lining your digs in silent awe. Show them what kind of things you like, plant those seeds of sophistication, suggest that you only watch films that are challenging and disturbing, sometimes confusing and even quite long and pretty boring. I’m trying to tell you to buy a Taxi Driver poster.

Get some shit clothes from a charity shop
Unfortunately you won’t get much bang for your buck in the “Bohemian Student” section of Marks and Spencers, so you’re left with two options. Badger your parents for a massive bundle of cash then march into Topshop demanding absolutely everything. Or do what I did and buy what are essentially fancy dress outfits from charity shops. Once in a while you’ll hit a winning combo like a lovely shirt and some very appealing slacks, the rest of the time you’ll look like an over-privileged moron trying to work some dead man’s trousers. God you’re beautiful.

Pretend to be totally at ease, sexually
One or two of your course-mates might have been doing it at a semi-professional level for absolutely ages, but on average you’ll find that most of your peers have a healthy sense of anxious doom about sex. Hence it’s your time to step up. Bullshit confidently about vaginal intercourse, speak at length on the importance of mutual satisfaction, suggest that you’ve had numerous partners and definitely know what a clitoris is. Pretty soon you’ll be doing the wild thing all night long. Rather than, say, nervously vomiting through your hands in a pub because someone you don’t know just sat down next to you.

I trust all of this helps.