Including this three-pronged attack 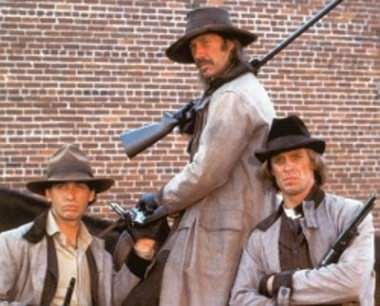 Talk about great movie casts, and you’ll hear the same stuff. Those shit Oceans movies, A Bridge Too Far, The Thin Red Line, Glengarry Glen Ross, The Godfathers, The Departed, The Towering Inferno. Loads of other ones. And yet none of those made it onto this small list, not because they’re bad, but because a great cast moves a man in a very subjective manner. With that in mind, here are seven movies that feature so many wonderful faces that I sit there part watching them, part groaning at the sheer wonderfulness of it all…

Oh man, True Romance is like the best Hollywood party you could ever imagine. You’ve got Oldman with dreads, Pitt sucking back dope fumes from a very penis looking object, Tony Soprano before he was Tony Soprano, the one from Perfect Strangers, the likeable Penn brother (RIP), Walken and Hopper in the greatest scene of both of their careers. Not to mention L Jackson, Kilmer as Elvis, Patricia Arquette bringing some major hotness. Oh yeah, and Christian Slater. As those popular Essex philosophers might say: “amaze”.

The Long Riders isn’t a great film, but it earns a place on this list for featuring the greatest ever acting dynasty together on screen – the Carradine brothers. Literally months, possibly years, have been spent pondering it, but it’s  impossible to figure out which one’s the coolest. Although it definitely isn’t Robert.

One of the steamiest movies you could ever see, featuring by far the greatest and hottest actress of all time – Kathleen Turner – backed up by three of the best actors since James Dean. You’ve got William Hurt who has never been bad in a film, Mickey Rourke who is still brilliant despite resembling Joan Rivers through a steroid infused looking glass, and Ted Danson, literally the most wonderful person ever. If you discount the time he thought blackface was appropriate fancy dress.

Whoever does the casting for Francis Ford Coppola is basically a genius. The Godfather movies unearthed Pacino, Cazale, De Niro, Duvall, while resuscitating Marlon Brando. Apocalypse Now had Indiana Jones in a minor role, Martin Sheen doing his best ever work, and Dennis Hopper being weird and druggy. Then there’s The Outsiders, which was made at the same time as Rumble Fish. That featured future teen heartthrobs like Cruise, Lowe, Estevez, Swayze, and The Karate Kid. But Rumble Fish just pips it for featuring Dillon, Rourke and Hopper as the greatest dysfunctional family in a pointlessly black and white 1980s film ever. And that includes De Niro and his small flock in Raging Bull.

Hannah and her Sisters

Not the best Woody Allen film – that accolade goes to Crimes and Misdemeanors – but definitely his finest cast. Put in “other roles they played” terms, you’ve got Ming the Merciless, the mum from The Lost Boys, Elaine from Seinfeld, Barton Fink, Rosemary’s Baby mama, Princess Leia, Harry Palmer, and Woody Allen.  If he’d managed to shoehorn Hawkeye from M*A*S*H into this one, people would literally have spaffed everywhere. And by people, I mean me.

Spike Lee’s enormous jazz love in features powerful thesp-flexing from Denzel Washington and Wesley Snipes. Throw Lee staples Turturro and L Jackson into the mix, and the whole thing is getting very dizzying in a good way. Then up turns the excellent Giancarlo Esposito and whoah! Easy now, Spike.

The Taking of Pelham One Two Three

A riot of a movie, and probably the most intense hour and a half you’ll ever endure. It scores highly on so many levels – it’s very New Yorkie, which is good – but mainly it scores highly because of the amazing cast. The peerless Walter Matthau is career peaking throughout, Robert Shaw, better known as the old sea dog in Jaws, is startlingly good, and then there’s Jerry Stiller – Ben’s dad in real life, George Costanza’s old man in Seinfeld. That’s quite a hat trick of magnificentness.