One of this lot WON 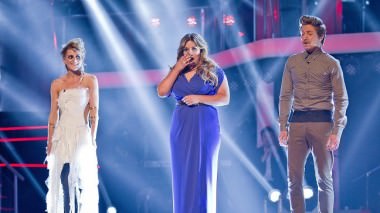 After the long wait, sitting through an England football match, watching the end of a computer animation about rats making vegetarian food in a kitchen, finally it began. The Voice. The final. This was going to be intense. EXPLOSION! Four empty revolving chairs, one microphone, one record deal, one love, one life, one for the money, two for the show, three little pigs, three times a lady, four turtle doves, five alive. This is getting stupid. Reggie Yates in a tux, Holly Willoughby dressed in a leather sex outfit, one bosom hoiked over the top to stop impatient truck drivers from changing channels. It was Bo versus Leanne versus Tyler versus Vince. Things just got real. Here’s how it went down:

THE FIRST ROUND OF SONGS

Bo went first. Bo looks like she should have hairy armpits, but she doesn’t. Bo also shops in the “Bohemian” section at Marks and Spencers. She took to the stage looking like Red Sonja’s pretentious little sister and sang “Nothing Compares 2 U” by Prince, but made famous by a young lad called S(k)in(h)ead  O’Connor. She killed it in a good way, Danny looked seriously turned on.

“Rappity rap rap, rappity rap, dope. I muthafuckin loved it!” rapped Will.i.am. Great start. The enjoyment-o-metre already cranked up to 7, this was shaping up to be one hell of a night. It was still only 7.30pm.

Next up, Leanne. Leanne is a world of woman, with a magnificent set of pipes. Which isn’t a euphemism for having good breasts. It means what it says. She can sing. She did “This is a Man’s World” by James Brown – the hardest working man in showbusiness, the Godfather of Soul, Mr Please Please Please… other nicknames. She did unbelievable vocal runs as her left hand played an invisible recorder. She was mind bogglingly good.

“She’s exactly the same off stage as she is on it!” roared Tomothy Jones in appreciation, not realising just how weird that would be.

“A hip, hop, a hippy, a hippy, to the hip-a-hip hop and ya don’t stop…” began Will.i.am, before petering out abruptly.

And up stepped Tyler. The hipster Gary Neville. “To know that EVERYONE voted for me last week is amazing,” he said arrogantly on the pre-song VT. Would such a cocksure display scupper his chances of winning this thing? Or would his losing be down to having unusual posture and singing like a girl? No one knew. There was a good chance that no one would ever know. What was clear is that he was singing “I’ll be There” by Michael Jackson. He wasn’t lying, he WAS there. There on television. Singing. It was an honest performance. Tyler brings the truth, everyone decided. But was it enough?

Before you knew it, it was Vince’s turn. Vince is a young lad who speaks patois, does his own styling, and looks a bit like a cross between Lady Gaga and Ian Drury. When it was announced that he was doing “Many Rivers to Cross” by Jimmy Cliff, one set of buttocks in particular clenched. It may or may not be the absolute favourite song by someone who could be writing this thing. Put short – the little bugger butchered greatness. Knees were fallen to, prayers were aimed skywards demanding Vince be cast back into society. Don’t ruin Jimmy Cliff, that’s the lesson.

“I’d never heard that song before,” confessed Danny, in a reality talent show homage to the luck of the Irish.

THE SECOND ROUND WHERE THEY SING WITH THEIR COACHES

Some Twatting from Twitter backstage. A bizarre moment in which Vince did a Rastamouse impression at Reggie Yates, which is like art imitating life or something. Then Holly Willoughby emerged, her large boobs compressed in tight leather. “It’s time for everyone to perform with their coaches!” she yelled.

To summarise what happened during this bit: Bo and Danny went to the Tate Modern and sang songs to people still flummoxed from the unusual doodles they’d just endured inside the building. The sense of relief was palpable. Danny rapped, the drum section of a marching band joined them on stage. Leanne and Tom performed one his old songs, and at one point there was a very real possibility that a very old man might have sex with a married woman on live television. Will.i.am wowed the crowds, Tyler did his signature girl impression. Then Vince and Jessie J pulled something so indulgent out of the bag that they may as well have just jizzed over everyone instead.

ED SHEERAN BREAK – he was great, like if Tracy Chapman was a public schoolboy.

ONE GETS THE CHOP THEN THE FINAL THREE SING

“It’s not the last you’ve seen… just the beginning… blah blah… go fuck yourselves!” spluttered Jessica J, as Vince fired finger pistols in the air and shouted “Here me now!” over and over again on his way to London Train Station. We’ll never see that guy again.

Then to the final songs. Each singer, one song each, their favourite from the series so far. The enjoyment-o-metre literally exploded. Its highest level was 10, it was on about 12. That thing barely stood a chance.

Bo, who is very Radio 2, redid the Coldplay song from a few weeks back. She injected such emotion into her rendition that Danny from The Script began weeping. Weeping. He was weeping actual tears. His eyes were red and raw. Salty. Bo looks like she gazes out of windows. Leanne repeated her version of “Run to You” and was preposterously good. To think that this world of woman was ever buried beneath Ruth Wotsit’s shadow suddenly felt absurd. Then Tyler did an impression of a thirteen year old girl nervously reprising “Higher Love” by Steve Winwood in front of the mirror.

They’d done all they could. It was out of their hands.

“It’s like a jungle sometimes it makes me wonder how I keep from going under, uh-huh-huh-huh-huh HUH” offered Will.i.am, usefully

MAROON 5 BREAK, A MASH UP OF JUDGE’S SONGS, THEN RESULTS

“The phone lines are now closed!” yelled Willoughby, both arms raised to the sky, her Joker smile so large and intense that it was part beguiling, part terrifying. The three finalists stood alone but together, but still mainly alone, in a short line of three horizontally ordered across the stage.

“And the winner of The Voice is… “ said Holly.

And then everyone piled on stage for a massive cluster snog, including the one who sang with his hands in his pockets, and the fat one with the quiff.

Great stuff. What shall we all do now?