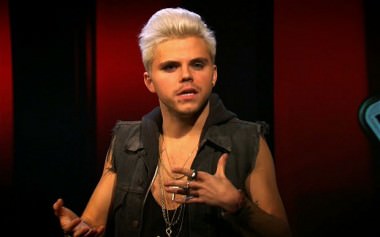 Here’s how the acts got on in order of when they sung, and what happened during the second bit when everyone changed outfits to pretend it was Sunday:

Like Duncan Goodhew suddenly pulling a top notch Lisa Stanfield impression out of the bag, Toni is startling – she can shriek blue eyed soul like no other in the competition. Jessie reacted to her performance of Tina Turner by staging an imaginary conversation between a person and a song. Which was hilarious. Then Will.i.am told one of his funny stories about going into space. On the downside, Toni had “bottom two” written all over her. Squeezed through.

Max went to a stage school, which means that when he meets strangers he probably shouts his name and does jazz hands. If he’s going to get on in life he needs to stop doing that. It’s annoying. He sang Free Fallin’ by Tom Petty, which is the kind of thing Alan Shearer listens to in his car, although he did sex the whole thing up by turning his guitar into a makeshift bongo to win over any watching trustafarians. Never without his top button done up, Max is “tie ready” at all times. Came second last.

No one had ever seen Ruth-Ann before, so when she took to the stage, there was a confused silence. Will.i.am stopped texting. Who was this chick? Would she blow all of our minds? Sadly, no. She yelled some bullshit about kissing, never once hitting an intended note, before the judges spent a tense few minutes attempting to paraphrase “dreadful” into a compliment. Toast. Hence why she got the boot. “You haven’t seen the last of me,” she declared ominously, before leaving the studio and silently getting the bus home.

In a real-life homage to the Andrew McCarthy/Kim Cattrall 1980s tour du force Mannequin, we have Vince – either a Top Shop mannequin come to life, or he’s Pete Bennett from Big Brother 7 pretending not to have Tourettes. Or, yes, he could be neither of those things. Who gives a shit? This is The Voice, man. It’s about the voice. He sang You Were Always on my Mind, and were he not still alive, Elvis would be turning in his grave.

Aleks opts to use the East European spelling of Alex, which means one of two things. Either a. Someone in his family is from Eastern Europe. Or b. Someone in his family can’t spell. Either way, Aleks side-swiped everyone by turning out to be a handsome young crooner, like Leon Wotsit or Ray Thingy-thing from X Factor. Of course, when he’s not singing, he’s fishing drowned swimmers out of a local pool with a giant hook on a stick in his job as an easily distracted lifeguard. He needs this.

Cassius supposedly works the night shift on the London Underground, which sounds like the kind of job you’d make up for curious financial reasons. He took to the stage rocking the whole suit with a hood vibe, which sends out mixed messages. Was he going to the office, or to a skate park? These kind of conundrums can be incredibly distressing, so it came as sweet relief when he started singing uplifting Coldplay music, and such worries faded like a tablet of Disprin in a cold glass of water. Plus he’s hilariously tiny! If it all goes bosoms up, he could re-market himself as “soul in your pocket”. Whatever that might entail.

David took everyone back to the 1980s by having a swept over bubble perm, and a mouth so reluctant to move when speaking normally that he’s like a young, less beautiful Moira Stewart. He sang something called “Sweet Disposition” like he was Bono (pronounced “bono”), or a 2011 version of X Factor hunk Matt Cardle. It was impressive. So pant wettingly impressive that he could be the dark horse in this competition. Remember the name, people – David… something.

Becky’s the grumpy teenager who is regularly shown on VT strumming at a guitar, telling her parents to fuck off, or sniffing glue at a bus stop. She’s great. “You’re a bit like Janis Joplin!” roared Tomothy Jones. Now if she can just avoid taking absolutely shitloads of heroin, she could make it to the final. Probably the third best so far behind Ruth and Jaz.

Bo is very 1979. There’s her name – presumably coined as a cap doff to Bo Derek in the movie 10 (released in 1979), then there’s her strange urban/tribal bone earrings that are straight from The Warriors (released 1979). Her hair is more Rod Stewart 1978, around the time of “Do Ya Think I’m Sexy”, and Bo’s song was “Running up that Hill” by Sir Kate Bush from 1985. It was a heady mix, performed in the style of an elvish woman not by a hill, but in some woods. She’s basically the new Dido.