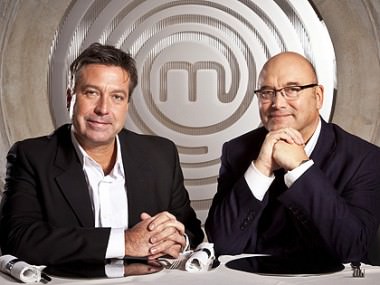 Part two of the three-pronged attack, this one was split into two parts. Part one: “Make me and Gregg thirty amuse bouches each!” barked John. “Amuse bouche being French for amusing a gentleman’s boosh.” Part two would find them cooking intricate meals for some chefs under the watchful eye of a lady and some prison inmates. She had her eye on Tom, the inmates drew short straws over Andrew. Everyone still wants Shelina to win, but here’s how things went down tonight…

Andrew – made a dick of himself by messing up the amuse bouche task. The judges wanted three little mouthfuls, he ignored their preamble and went about doing a three course invention round on massive plates. He fared slightly better in the “cooking for chefs” task, where he threw together a spot of pigeon in pigeon sauce with a chunk of bacon and a single carrot. He loses points for getting a helping hand, and then weeping from every pore because some guy hilariously nicknamed Mr Kitchen paid him a backhanded compliment about some shit meal he’d made a few weeks ago. At current standings, he’s in third.

Tom – pulled his usual trick of giving himself far too much to do in the first task, so Gregg and John were left to daydream about what his Spaghetti Bolognese made from rhubarb might have been like with the meat sauce added. He then aced the professional kitchen round with a meal of lemon parfait with sheep yoghurt ice cream and hair gel, plus a weird science biscuit covered in gold. Impressively he managed to do all of this while the supervising chef – a funny mirror reflection of Joanna Lumley – licked her teeth at him from just millimetres away. He needed a good day at the office, and he had it. Moves into second.

Shelina – continues to do no wrong. Her bite-size treats had Wallace almost uncontrollable with joy, and Torode – who usually takes one spoonful of a dessert and immediately spits it into the bin and starts desperately scraping it from his tongue – even liked her rice pudding and mangoes. In the second round, she blew everyone’s minds with her lobster poached in Tizer with dwarf vegetables on a really tiny plate. Everyone adored the stuff, so much so that they all started clapping the minute she emerged from the kitchen. Get used to the applause, Shelina.