Not including The Good Life… 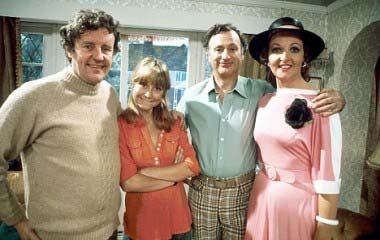 Whilst Hollywood appears to be caught in a decade-long creative slump, TV shows seem to be getting better and better. You’ve got Homelands, Community, Mad Men, Curb Your Enthusiasm, 30 Rock. Loads of others. That one about the Pacific a while back. And yet there doesn’t appear to be much going on in the way of great new UK sitcoms. Peep Show filled the void for a bit, and The Inbetweeners was brilliantly funny at times. But that seems to be about it.

(Note no mention of Gavin and Stacey)

With that in mind, we thought it high time to compile a list of the greatest UK sitcoms ever made. TV bigwigs, take note, this is the good stuff…. 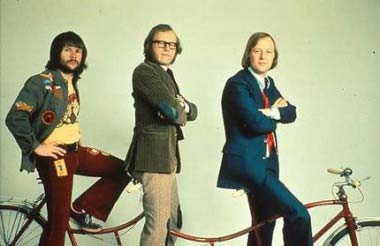 Remember, this is in no particular order, so we’re not saying that The Goodies was the greatest UK sitcom ever made, just that it was brilliant. Essentially Monty Python for all of the family, it followed the zany antics of Bill Oddie, Graeme Garden and Tim Brooke-Taylor, through a mixture of weird sketches and more usual sitcom conventions like sitting around talking about stuff. Oddie has gone on to become feverish with enthusiasm about things like staring at birds through binoculars, whilst Garden is often on the radio alongside his old pal, Brooke-Taylor. 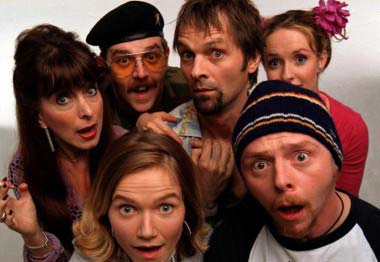 In America, they attempted to remake Spaced with better looking actors, and the whole thing just didn’t translate. Flatmates, funny neighbours, a best friend with a gun problem. It should have been a shoo-in. Simon Pegg has since edged ever closer to possibly becoming a Scientologist, but this will forever remain the real feather in his cap. It even managed the impressive feat of making us appreciate the show’s editor. That had literally never happened before. 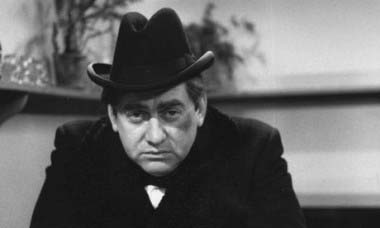 UK sitcom history is awash with bad TV plucked from the music hall tradition – all clumsy innuendo this, and I can’t understand what the brown man’s saying that. So, Hancock’s Half Hour looks like a 1950s miracle, sitting quite comfortably alongside Curb Your Enthusiasm as a show essentially about nothing, just another socially inept man going about his day. Genuinely brilliant. Then Tony Hancock went and killed himself in 1968, so that was that. 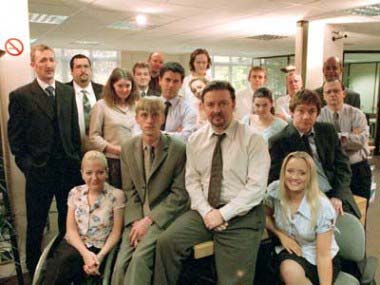 Ricky Gervais’s masterpiece, The Office was a breath of fresh air. Funny, awkward, sometimes moving, it was a work of brilliance, with the most satisfactory denouement in TV history. He hasn’t quite hit his stride in the same way since. And the less said about Derek and the appalling show about dwarfs the better. Either way, for The Office alone, we shall always hold Gervais in high regard. And get this: the American version is arguably better. 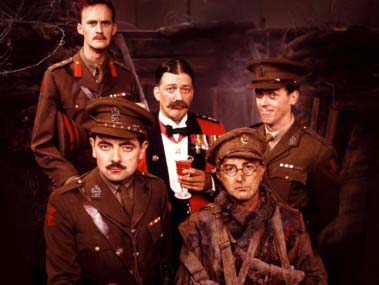 Were Blackadder to have only lasted for one series it would easily make it onto a list of the worst UK sitcoms of all time. The first outing was shitballs. And yet, like a funny Lazarus with a codpiece on, the second series arose from behind a studio curtain, and completely took everyone by surprise. Blackadder and Baldrick had undergone a personality switcheroo, with Blackadder now the brains, and Baldrick the idiot, and everything thereafter slotted neatly into place. For our money the best series was Blackadder The Third – mainly for Hugh Laurie’s stupid prince. 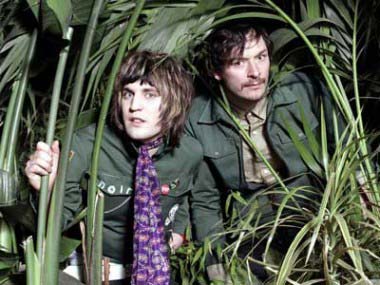 This one is sure to split consensus right down the middle, and it’s probably best enjoyed in limited doses. To some, these men are hip comic geniuses, whilst to others, they’re just a couple of haircuts desperately talking in absurdities, hoping that something funny will come out of a long-winded monologue about a talking fox with a suit on. We happen to think that the first series – set in a zoo – was absolutely great. The second one – set in a flat – had its moments. And the third – set in Camden – was almost unbearable to watch.The real fear is that were they to make a fourth series, we’d end up grenading our lounge just to put the TV off. 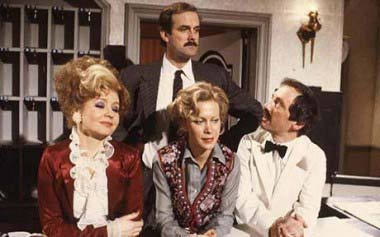 With the possible exception of The Life of Brian, this is definitely the best thing to come from any of the Monty Pythons. And that includes all of Terry Gilliam’s weird films. Even Twelve Monkeys. Everyone knows the drill – Basil shouts, Sybil rolls her eyes, Polly maintains a clear head, and Manuel says something stupid in broken English. Repeat until not funny any more – which, by the way, is never. 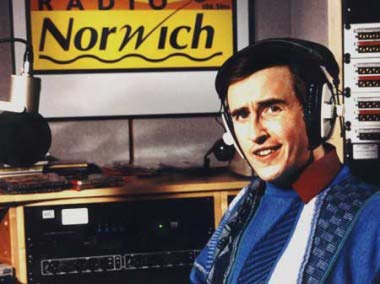 One of the finest comedy characters ever created, especially when he’s shouting “Dan” over and over again in a carpark. Other highlights include: Alan’s big plate, his appalling attempts to make up a fake name to the police, and the episode where he overhears Lynn mocking him behind his back. Coogan famously went on to out self-destruct Courtney Love, which is part impressive, part terrifying. 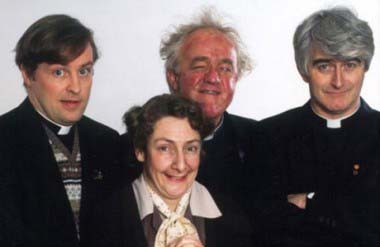 Ask anyone, this is definitely the funniest sitcom about Irish priests ever made. In format, it sits somewhere between Blackadder – in that the two main characters comprise a bewildered straight man, and a cretin – and the more surreal comedy of The Goodies or The Mighty Boosh. We’re such big fans of the show that we once named Father Ted one of our four favourite ever sitcom characters. In many ways, he was the ultimate steady hand in the centre of a hurricane of stupidity. The show also managed the unmanageable by making Graham Norton not just funny, but really funny. 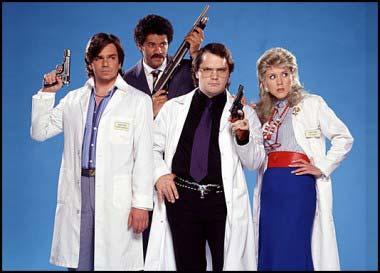 It was a very trying experience, coming up with the final sitcom on the list, hence honourable mentions must go to: Nighty Night, The League of Gentlemen, Sorry!, The Young Ones, The Thick of It, Peep Show, Bread, Terry & June, Porridge, and The Good Life. But, in the end, we went for the one series wonder, – the petrifying story of a horror writer playing a doctor in a spooky hospital. It’s a contentious one, but we’re sticking with it. Garth Marenghi’s Dark Place.

Now get stuck in with the old comments…