The time I very nearly fainted at the cinema 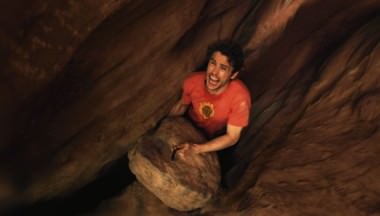 When I was 6-years-old I ran into a gate and cut my lip wide open. After taking one look at my teary, bloodied face my dad promptly fainted and had to be looked after by my mother as I took care of myself by running my swollen mouth under a cold kitchen tap looking out to my frightened mum, and my unconscious father lying face down on the sofa. This story is pointless other than to highlight the wonderful genes I have inherited.

A year or so ago I went to see 127 Hours having dismissed my sister’s suggestion of going to see the ballet dancing thriller Black Swan as it might be ‘a bit of a girls film’. Somehow, despite the masses of coverage I had successfully managed to avoid finding out what it was about until moments before entering the cinema, when my sister helpfully asked me to let her know what happens when the man cuts his own arm off down a canyon – she didn’t think she would be able to watch, she explained.

No worries, I chuckled. I’m not squeamish – I’ve smashed my teeth in and cut my head open with no ill effect, so didn’t foresee a problem. And then the cold hand of genetics struck from the blue, as a bit of flesh smeared down a rock, and I got all “fainting dad” on my own ass. I had fainted once before – for reasons of dehydration – so knew the warning signs. I started feeling sick, I couldn’t see the screen for all the stars flashing past my eyes, and my attempts to make it to the loo were scuppered by my apparent inability to steady my shaking legs enough to stand.

By this point, James Franco’s arm was still in place – just lodged under that big fucking rock – so I managed to play it cool and compose myself by tightly closing my eyes for a couple of minutes and shouting at myself to man up in my head. Unfortunately when I reopened them, Franco was pulling a pair of pliers from his bag, and something about the determined look in his eyes told me that they were going to find themselves poking around inside his body. Giving in to the inevitable, and sensing that my delicate disposition probably couldn’t cope with this kind of gruesome shit, I tapped my sister on the shoulder, hurriedly explained that I was fucking off NOW, and slalomed haphazardly out of the cinema clonking down the aisles like a human pinball – saving myself the slightly greater shame of someone having to be called to carry me out.