Three players who should have played for Liverpool 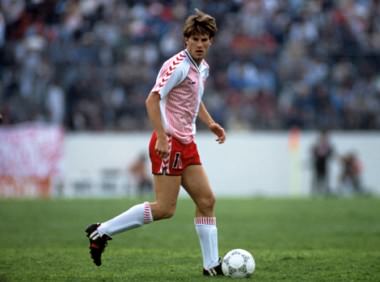 People literally never ask me, “Josh, have you ever loved a man?” – to which the answer is yes. Of course I have. I have loved many men. I have loved more than one man at a time. Loved them with my eyes. And with my mind. My eyes, and my mind. Nothing more, nothing less. No funny business.

My favourite men have all been footballers, with the notable exception of Chevy Chase, who wasn’t one.

I think Jerry Seinfeld put it best when he explained that, as a sports fan, you don’t support the players – they’re basically pricks(I’m paraphrasing) – rather, you support their uniform. I was born into a family of scouse people, and once I’d realised that all of the coughing, hacking, sniffing and throat clearing was just their way of having a nice pleasant conversation with one another, I stopped crying and began to support the local team – Liverpool FC. At that time, made up of Kevin Keegs, Emlyn Hughes, Slugger O’Doyle, and Hotfoot McManamanamanaman (memory’s a bit foggy).

All great players, but it was the shirt which really captured my eye. It was RED, like red crayon. Or rose petals (not a euphemism). Or blood.

Pretty soon, Liverpool had smashed their way to the top of the world series, they’d won the FA Cup, and they’d totally shat on everyone in the superbowl. They persisted in their resplendent scarlet outfits, and were a team of football superstars who could probably have gone on Mastermind and been fucking amazing at that too. They were on the front covers of all the best magazines – Time, Rolling Stone, Grazia, Just 17 – you name it. Boy were they cool! Prince Kenny – now a KING who recently rode into Anfield on Sammy Lee’s back to a hero’s welcome – Frankie Goes to Ian Rush, Fat Man Molby, Stevie Stevie McMahon, Alan Handsome. Just behind them, you had The Catalogue Model Peter Beardsley, Rapping John Barnes, Frankie Goes to Jon Aldridge, Brucie Grob Grob.

They were literally unbeatable – going something like seventeen years without allowing the opposition to even touch the ball. And then it all went tits up. Prince Kenny hung up his football robe and slippers, and a moustached demon came from somewhere far away in the icy hills to turn everything to shit. He doesn’t have the moustache any more, which – football fury aside – is a massive improvement. He looks so much better. But that’s hindsight for you.

Anyway, the point of this accurately detailed frolic down memory lane is with a view to pinpointing three great footballers who forced me to shun the Lord’s commandment about not coveting thine neighbour’s goats. Players whom I wish could have played for Liverpool.

The first was one half of the chart topping football supergroup, Glenn and Chris – otherwise known as Chris Waddle. Not only a singer/rapper of some note, he could make the ball glide for him like it were moving at lightening speed in a vortex, leaving defenders clumsily kicking themselves in the face or knocking themselves out on goalposts in a bid to get the thing off him. He also pioneered the two-haircuts look which really caught fire in the 1980s. Business at the top, party at the back.

The next was Matthew Le Tissier – a man spawned of the same matinee idol mould as Peter Beardsley, but with real potential to one day sport the same kind of barrel chest that served Jan Molby so well during his time at the club. A scorer of preposterous goals, it’s not too much of a stretch to suggest that if Southampton’s Goal God Le Tissier were South American, he’d be mopping up Maradona’s leftovers for the rest of time.