Including one of these guys 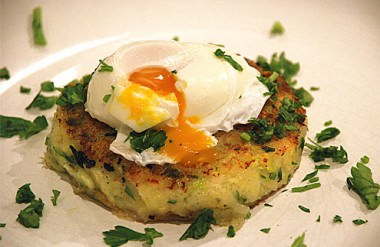 Few moments in life come close to the limitless satisfaction of staring down at a Full English, armed on one side with a sweet mug of splosh, a refreshing glass of orange juice on the other. A feast fit for a million kings, you’ve got the standard bacon, eggs, sausage, beans. Mushrooms and tomatoes have also become a staple. But beyond that, the waters begin to fog – there are no rules. Do you stick to the standard? Do you pimp it with extras? Questions which lead seamlessly to our four favourite Full English side orders. Feel free to make your feelings known on the subject in the comments section…

The ideal accompaniment to any modern breakfast, the naysayers will inform you that it’s fashioned from blood, foreskins and pig guts, but don’t worry about them – they’re only about thirty per cent right. It’s commonly known as Blood Sausage in other countries, and it goes wonderfully with a slop of hot egg juice, washed down with a glug of PG. It’s posh. On Masterchef, they like to serve it as a mattress for scallops with a net curtain of pea puree and a crispy bacon shard. Lovely stuff.

You might fancy it, but under no circumstances should you ever eat chips for breakfast. Once that particular barrier has been blown down, you’re on a fast track that only ends one way – with your corpse being airlifted from your house. That said, a potato snack can still enliven your greasy plate in the form of a finely sculpted hash brown – a kind of “almost rosti” which dates back to 1888. They can’t be all bad, because the Swiss have been eating these things for breakfast since the dawn of time, and those guys invented Roger Federer.

Not to be had every time, but as an occasional treat you can’t go wrong with fried bread. It’s bread that’s been fried. Rarely has the process of naming a food been so easy. We tend to alternate brown toast (healthy) with fried white (unhealthy), thus creating a perfectly balanced equilibrium. The ideal dieting technique.

Back when Britain was perpetually at war with people, old women would spend their afternoons on all fours scrubbing the front step like the Pope was coming to visit. Evenings would involve a simple dinner of powdered egg, a lump of gammon and some veg, followed by half a bottle of sweet sherry and a massive sing/weep around the bonfire. Great days. Particularly during the morning, when they’d use their large matronly hands to make potato and veg cakes from last night’s leftovers. Otherwise know as “Bubble’n’Squeak”. “Would Mister Hitler eat this, Mother?” you’d ask with soot caking your eyes like manscara. “No, Mister Hitler don’t know his anus from from his elbows,” laughed Mother, reassuringly. You get the picture. Or not.