Including a little something from this guy 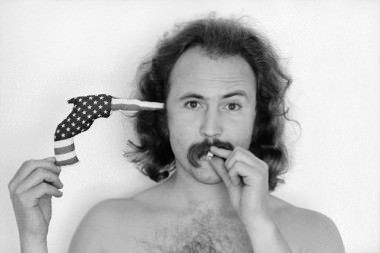 At Interestment, the first thing we like to do on a Monday morning is wipe the weekend sleep from our faces and pop the kettle on for a decaff tea. The second thing we do is select a record to play us into the week. We’re just sexy like that. It’s an important decision, this soundtrack selection, one which sets the right mood for the choppy waters ahead. A decent morning track has to have certain components – often it’s not something you’d play at any other time of the day. Sometimes you wouldn’t even admit to liking the bloody thing. A straw poll revealed that upbeat optimism, energising punk, sweeping soul, hardcore hip hop, or even a folk-rock classic seem to be just the tonic. With that in mind, here’s a selection of ten tracks that frequently appear on our “kick-start the day” playlist. This isn’t the definitive list, just some songs that we like on an ever-changing musical landscape. Please feel free to add your own in the comments section…

Here’s a fact: there is nothing more uplifting than a 1980’s film soundtrack. The reversely proportional shit film/amazing soundtrack ratio went stratospheric during the decade. No doubt. Our favourite soundtrack is Breakdance – from the tale of a ballerina learning street smarts from a couple of fierce heterosexuals. With moving results. Unfortunately the weird beat professors from Kraftwerk decided not to allow this track to appear on the album even though it played during the wonderful broom-sweeping dance sequence that put the movie on the map. It did come out as a single though. Pop it on, feel the upliftingness searing through your bones. POW!

For a kick up the backside, we always go straight for some aggressive slightly-transvestite US punk. The Ramones never fail, Richard Hell has a few choice moments. We might even smear a buttery finger over the Debbie Harry section. But the one with the most crackles from overplaying is Trash by the New York Dolls, which is guaranteed to put rocket fuel in your rollerskates. The only downside is that you might leave the house looking for a fight.

A poor man’s Michael Jackson, Sylvers was a child star of the soul scene in the 1970s. This was his best song, made even better in the 1980s when a guy called Mr K decided to monkey around with the arrangement. A top choice for people who like to transform their getting dressed routine into a funky dance session.

Nothing buffers the unending hopelessness of having to go to work like the tale of someone who had it all, then got cocky, lost everything, and is now probably down and out and on the game to feed an deodorant can sniffing habit. Ha! Two fingers raised to the rich!  Good morning, World!

Isaac Hayes, Close to You

Sometimes the glint in the morning sun calls for sweeping orchestral soul music, which leaves little option beyond the irresistable bald man Isaac Hayes or the hungry midnight lover Barry White. Hayes always wins out in the end, because he’s not quite so intense as Barry, and the toss up is generally between this Carpenters cover, or Ike’s Mood. This one tends to get the nod because it mentions birds, and you know. It’s morning.

Ask any old lady and she’ll tell you – early spring mornings were made for hardcore hip hop. When it comes to early morning raps, pretty much any member of the Juice Crew will do. Big Daddy Kane, Master Ace, or the greatest rhyme slinger of the lot – Kool G Rap. This ode to how rubbish New York can be sometimes will ease you into the day with a wholly unnecessary limp, and possibly a toothpick sitting lazily in one corner of your mouth. Of course, if you’re feeling a bit sensitive, you can play something jazzy by Common or Mos Def.

This one gets played at least once a week. Generally when we’ve woken up with addled minds, and nervous sweat glands readied to spray sweet hell all over anyone who stands too close on the tube. Uplifting messages from a man who has gone on to become some kind of priest. It’s very calming.

Once in a while, generally in the summer, we’ll crave some hippy-dippy bullshit about loving one another. Thinly veiled messages about group sex possibilities, or odes to flowers. This tends to lead us in the direction of Van Morrison, Stephen Stills, or his partner in hair, David Crosby. This happy-clappy number is just the ticket if you’re the kind of person who doesn’t feel offended by the freaks who offer random hugs to people.

Vicky D, This Beat is Mine

We like this because it makes us feel like strong independent women. Even though we might be 35 year old men. Early Madonna has a similar effect. As does anything by Stevie Nicks.