Robbed at The Oscars: De Niro and Pacino

Does THE ACADEMY know something we don’t? 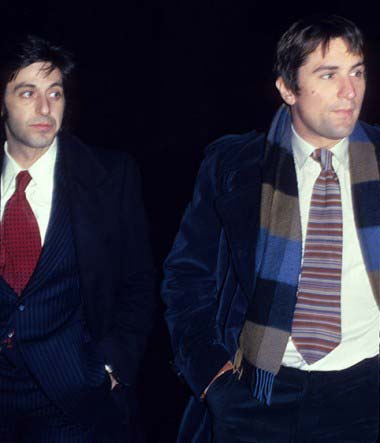 Smash the door down, barge into any film buff conference, mention Robert De Niro, and you will see a room full of grown ups swoon – some with start crying because they’re too happy, others will immediately begin kissing. Throw Al Pacino’s name into the mix, and you’ll have to leave. Just back out of the door the way you came in. You don’t need to see what happens next. No man does. And yet, at the height of their acting prowess – known to those who follow history by years as “the 1970s” – they were virtually ignored on Oscar night.

De Niro got the Best Supporting Actor nod in 1974 for playing a young Marlon Brando in The Godfather Part 2. But their classic turns in Serpico, Dog Day Afternoon, Taxi Driver, The Deer Hunter – all totally overlooked. In some cases it was possibly the right decision – Pacino in Dog Day Afternoon lost out to Jack Nicholson in One Flew Over The Cuckoo’s Nest in 1975 – while in other cases it just so wasn’t – De Niro’s career peaking performance in Taxi Driver was better than Peter Finch’s decent one in the magnificent shouty movie Network, 1976.

Things got even worse in the 1980s. De Niro finally got the Best Actor gong for Raging Bull – essentially for making himself fat and then thin, putting him up there with modern greats like Claire from Steps and Jennifer Ellison. But after that, both actors were entirely blanked, even from the nominations, until 1990. Pacino had a quiet decade, but still managed to make Scarface and Sea of Love – both completely brilliant. While De Niro was on a roll – The King of Comedy, Once Upon a Time In America, The Mission, Angel Heart, the fantastic Midnight Run. All scorching hot performances, all uncongratulated on Oscar night. It was a shameful decade for The Academy and their buddies.

To add insult to injury, Al Pacino finally got his Best Actor Oscar in 1992 – for Scent of a Woman. It is his worst film performance.

2 Responses to Robbed at The Oscars: De Niro and Pacino