Get excited everyone! It’s a TRON game! 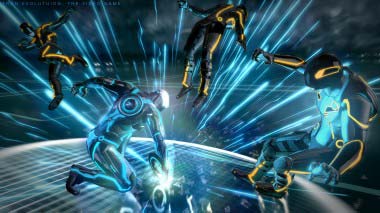 Okay, this is going to blow your mind, so take a deep breath. Tron, the 1982 film, is based on a video game, and now there’s a video game, based on the film Tron: Legacy from this year – which is still a movie based on a video game. It’s like looking in a mirror from another mirror, and if you thought about it for too long, the fragments which make up your brain would literally unravel. So don’t dwell on it, all you need to know is that there’s a new computer game ready to be flogged in time for Christmas, and you should probably think about buying it.

The games itself – available for your snazzy Xbox or your equally shiny Playstation 2 – is called Tron: Evolution, it was crafted by the big throbbing minds at Disney, and it has been described as:

When asked his thoughts on the game, our usually chatty reviewer described it as “addictive”, then hung up. Presumably, he was playing the thing.